This week’s topic: Che Content And Role Of Personal Libraries 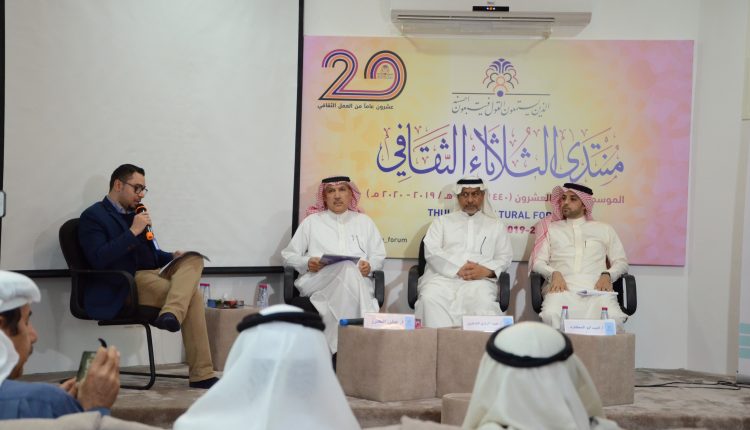 In celebration of “The Arabic Language” International Day, which falls on the 18th of December, Althulatha Cultural Forum held a special seminar entitled “Personal Libraries: Content and role”. The seminar took place on December 17th, 2019 and it was led by Dr. Mohammed Alhamaqi and religious scholar Shaikh & Dr. Faisal Alawamy was the guest of honor.  A group of bookstore owners and managers of personal libraries in Qatif attended the seminar and shared their experiences. They also talked about the challenges they encounter in their work as well as the key role these libraries play in their communities.

The night commenced with a short film celebrating “The Arabic Language” International Day. The film showcased the kingdoms’ efforts to preserve and amplify Arabic. Next, Mr. Abdulatheem Alshelly gave a brief speech under the title “I am Human,” which complemented the visual art gallery by the artist Tawfeeq Alhomaidy. The speech focused on the gallery’s artistic experience along with the nature and ideas of the artwork collection. Then, both Mr. Abdullah Alsubaiy and Mr. Abdullah Almusaqlab shared their experience of being members of the “Kidney Friends Group” whose primary aim is caring for patients of kidney failure/ renal diseases.  The group also encourages family members to donate and spread awareness about the importance of kidney donation. After that, the author Huda Alowa talked about both her books and her experience with writing. Also, she held a book signing session for her latest books “In The Midst Of Darkness” & “He Sees Me”.

Dr. Mohammad Hamaqi began the panel discussion/presentation with an introduction to the Arabic Language and its impact on socio-cultural and intellectual development. He pointed out that Arabic has been going through a down phase recently due largely to lack of cultural awareness of its native speakers. He also, emphasized the importance of using Arabic again as a unifying factor in the community. That is why Althulatha Forum decided to reognize and celebrate this important event by organizing a seminar to discuss the social role and challenges of personal and local libraries. Dr. Hamaqi introduced members of the panel starting with Mr. Ali Alhirz (Founder of “Jadal” Library), Mr. Abdulbari Aldakheel (The librarian of the cleric Hassan Alsaffar) and finally, Mr. Adeeb Abu Almakarim representative of his fathers’ library (Abdul Qader Abu Almakarim Library).

Mr. Alhirz began his remarks by talking about his passion and love for books which led him to buy and collect books, which , over time, evolved into an impressive personal library with thousands of books.  Mr. Alhirz said he derives much joy and delight from his voluminous  library. In addition to the thousands of books, Mr. Alhirz’s library also has an indexed archive of documents and newspapers.  The sheer volume of books of the library in various fields of knowledge has made it a coveted destination for students, researchers, and book lovers. Mr. Alhirz also shared that he holds frequent seminars in his library on various cultural and intellectual issues. Mr. Alhirs maintained that many people in Qatif are fond of reading, and their passion for reading  explains their addiction to buying books from bookstores and book exhibits that take place in various cities in the country and the region. This explains, Mr. Alhirz asserted, why Qatif has a higher number of annual book releases compared to other cities in the kingdom.  Mr. Alhirz concluded by saying that the technological revolution has neither replaced the traditional ways of reading nor reduced the popularity of conventional libraries.

The second panelist, Mr. Aldakheel, spoke about the history and phases of establishing Alsaffar’s library, whose owner has legally granted it to be a public property. Alsffar library is full of religious, judicial and historical resources along with descriptive volumes about a variety of fields of knowledge. Then, Mr. Aldakheel underscored the importance of establishing specialized libraries for scientific topics. He also indicated that the community should promote reading paper and/or electronic books. Mr. Aldakheel maintained that it does not matter whether an individual reads conventional books or electronic ones as long as the passion for reading is fulfilled and fostered. Although there are impressive collections of libraries in the community, Mr. Aldakheel would like to see more visitors to and users of libraries.

The third and final panelist, Mr. AbuAlmakarem, began his remarks by describing his fathers’ library which consists of nine thousand books on a variety of fields.  The library also contains a visual and audio section that has many historical materials. He mentioned that the library is open for students, but is not fully capable of accommodating and serving visitors. A larger building with better and modern library facilities would have to be built for the library to open for the public.  He lamented that most local donations are given to build mosques and other places of worship, and it would be great for the community to direct some of the donation funds to support cultural centers such as libraries. Also, Mr. Abulmakarem suggested creating libraries inside mosques to better educate the community. Moreover, he called upon the Ministry of Culture to support local and personal libraries by providing new materials and establishing a national library system with a centralized database of all the books in all the libraries in the country.

Many comments and questions were shared by the audience.  The first was made by Mr. Moaed Alzayer, the manager of Qatif Public Library, who highlighted both the importance and cultural need for having access to libraries in every town of Qatif. Then he stated that the public library is helping personal libraries with classifying systems and organizing cultural activities and events. Another attendee, Mr. Nizar Alabdul Jabbar, kindly shared his experience of establishing his own library which includes more than fifty thousand books and two hundred Journals. Three thousands of these books are about the city of Qatif city. Mr. Abdul Jabbar concluded by saying that there are tens of local personal libraries that are still unknown and inaccessible to the public.

Moreover, Mr. Abdulrasool Alghoriafy stated that traditional ways of reading are more engaging than electronic ones. Then he also agreed that encouraging the public to visit libraries is essential. As for Mr. Adnan Alsadah, he suggested ways to motivate students to start going to the libraries and suggested following the successful model of Aramco libraries. From another corner of the forum, the artist Abdullah Alshelly expressed the vital role of book exhibits in the reading process, and stated that printed books are still popular and in demand. Then, Mr. Alawy Alkhabbaz took the guests back to the fifties tracing the founding and evolution of local libraries in Qatief.

Dr. Ihab Alfadly wondered whether people in Qatif are interested in Islamic and Arabic historical manuscripts. Next, Mr. Majdi Alzayer commented about some of the barriers to reading that the new generation has, most notably the ludicrous idea  that reading and books are a total waste of time, and that novels and fiction are useless. Then Mrs. Huda AL Nasser expressed the need for new programs and ways of addressing youth reading interests and accommodating their lifestyle when promoting reading. She also noted the need for reliable  statistics and scientific data regarding amount of reading, types of books read, and book sale rates. Mr. Adnan Alawamy answered a question about manuscripts by saying that many individuals possess historical manuscripts in Qatif, but they prefer to keep them away from public eyes as a way of preserving and protecting them.

The evening event was concluded by final remarks that were given by the special guest Shaikh and Dr. Faisal Alawamy. He expressed his gratitude for the Althulatha Cultural Forum’s efforts in promoting social awareness about timely and important topics that over time would make us among the culturally and intellectually rich countries. He also suggested that our community should free itself of any type of cultural dependence and show pride in its unique identity which is known for its flexibility, tolerance , respect and openness to different cultures and ideas.