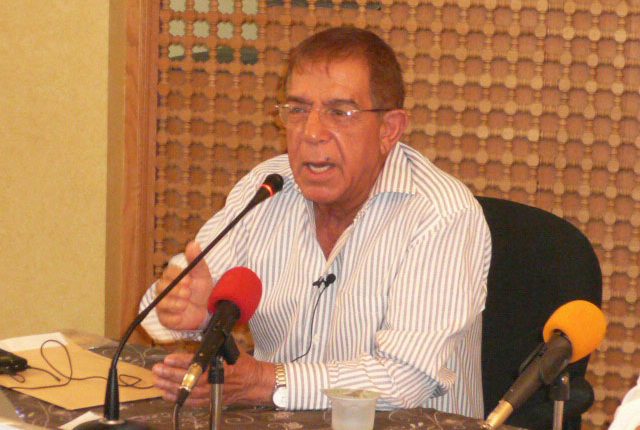 In the evening of Tuesday, Rabi Alawal 27th, 1430AH corresponding to March 24th, 2009, Althulatha Cultural Forum in Qatif invited Dr. Hasan AlGhanim to review historical and social events in Qatif region during the WWII. AlGhanim was born in Qatif in 1931 and attained his degree in Epidemiology at Michigan State University in 1966. He joined Aramco Oil Company in 1944; a year before the end of WWII, and he joined the first educational mission to Beirut by Aramco. The speaker presented a program called “Your Health” in Aramco TV for fourteen years, participated in the first Saudi film produced in 1950 and he was honored for his role. Currently, he works for Dar Alriyadh Institution for Training and Academic Rehabilitation.

Zaki Albaharnah, the moderator, introduced AlGhanim, mentioning the importance of writing and recording history, whether printed or oral.

The moderator indicated that Qatif has a great history which was recorded in some books like “Dakirat Anwar Albadrain; The Lights of the Two Moons Memory” by Sheikh Ali Albaladi and “Sahil Aldahab Alaswad; Coast of the Black Gold” by Mohammad Sa’eed Almuslim beside dozens of valuable historical studies and researches.

The lecturer mentioned that the region during the Second World faced poor health conditions referring to the high percentage of mortalities due to the spread of diseases like malaria, cholera and smallpox.

AlGhanim talked about the existence of some governmental centers in Qatif that were established before the outbreak of the war like a police center and a public school. The school offered a simple writing course and a limited course on the Holy Qur’an, and it lacked qualified staff which led to bringing a group of teachers from Hijaz region.

The lecturer pointed that there were many local tutors as well as academic hawzas (religious institutes) but official education in Qatif did not began until King Fahad became the Minister of Education. He explained how some prominent figures in the region used to buy books from Bahrain and lent them to reading fans in order to expand education.

AlGhanim talked about poverty which people suffered from and how they depended on dates, vegetables, fish and rice which was cultivated in Qatif. Rice crops used to satisfy some of the people’s needs before they faced starvation due to the Italian attacks on the region, which prevented Indian ships from sailing to the Gulf region with goods since 1941.

The speaker described the region’s condition in which poverty, starvation and diseases were prevalent; then, he indicated the factors that contributed in turning this situation over. He pointed that the war ended in the mid of 1945, and indicated that when the war- participant states withdrew from the region, they got rid of their, armies’ food supplies which benefited many people in the region for a long time. Moreover, the establishment of Aramco Oil Company enhanced people’s economic as well as health conditions when King Abdulaziz Al Saud ordered Aramco of offering health treatment to all; not to its employees only.

He reviewed the political events which the region went through, made people follow them up and which consequently uplifted the level of people’s political culture. He said that even though the region did not have any media sources that provide it with events, it depended on some newspapers that were brought from Bahrain by four people beside three radios, and that was adequate to spread political awareness in the region.

Such political awareness in the forties made groups of intellectuals and efficient workers from different Arab states come to work in Aramco. They influenced the local community politically and contributed in laying the basis for national movements. They called for the attention of citizens who work in Aramco to their rights that equalize them with foreign employees like using buses and providing them with some services in their rooms such as refrigerators and air conditioning.

He recalled his meeting with King Abdulaziz in 1947 in which AlGhanim, who was thirteen years old at that time, delivered a speech in front of him in Arabic and English. The King was impressed by him and rewarded him with five hundred Riyals which AlGhanim’s grandfather used to buy him two plots of land after the end of the WWII by two years.

At the same time, the government obligated Aramco to separates the students who were less that fourteen years old to study in governmental schools, but Aramco interceded for some unique students, that AlGhanim was one of them, and promised the government of educating them abroad to be capable of serving their country.

He mentioned that he had a leading role in the documentary film which was produced by Aramco about the life and evolution of flies in 1959. This film was showed in all parts of the poor world in Latin America and East Asia beside many villages in Saudi Arabia, and it was viewed to the Forum attendants.

The attendance was very interactive, and asked many questions about specific details over the history of the region, and they were answered adequately by the speaker.