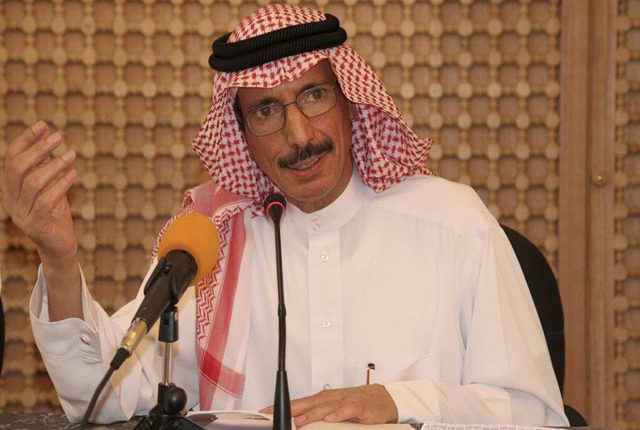 In the evening of Tuesday, Jumada Alawal 17th, 1430AH, corresponding to May 12th, 2009, Althulatha Cultural Forum in Qatif hosted Hasan AlSaba’ to deliver a lecture about satirical literature. AbdulWahab AlAreedh, the moderator, defined satirical literature as it is a dark comedy presented in a sarcastic form that reflects the citizen’s political and social sufferings. Then, he introduced the lecturer and presented his experience in this art which started since the beginning of the nineties in Alyaum newspaper.

AlSaba’ was born in Saihat, Saudi Arabia, and holds a bachelor degree in History from King Saud University in Riyadh. He, also, holds a master degree in Public Administration from Indiana State University in United States. He is a member in the Literary Club in Eastern Province, and participated in many literary and poem programs. He regularly writes poetry, literary and social articles. Moreover, AlSaba’ has a weekly corner in Alyaum, and edits its cultural pages. He, also, has several poetical publications like “Zaytuha Wa Sahar AlQanadeel”, “Hadiqat Alzaman AlAtti” and “Rakalat Tarjeeh”.

The lecturer mentioned that the Arab World did not care about this type of literature unlike the Western culture. He indicated that recording its history was neglected although the Arab literary heritage was full of it in both; poetry and prose, unlike the history of serious writings. This made the society miscomprehend such type of writing, forced some writers to limit themselves to serious writing in public, and made them confine their satirical writings to their private gatherings.

AlSaba’ stated that this type of literature mixes bitterness with jokes to ease tensions down, and makes seriousness adopts laughter. It is, also, the humor that adjusts and addresses the distorted behaviors and practices.

He reviewed a set of names of literates of this art throughout the previous ages. He introduced them briefly, and presented examples of their writings; some of them were AlJahidh and Ali bin Sawdoon Albashbaghawi in the ancient ages, as well as Moliere, George Bernard Shaw, Mark Twain, AbdulHameed AlDeeb, Husain Shafiq AlMasri and George Jurdaq in modern eras. Moreover, he read some texts in poetry and prose that included sarcasm which most of them aim addressing the refused social habits like greed, intrusion and stinginess.

The lecturer talked, in detail, about AlJahid’s style in writing which is characterized with simplicity, bitterness and sarcasm, and how he enriched the Arab heritage with his satirical masterpieces like his book “AlBukhala; The Scrooges” in which he adopted laughter philosophy, and reported the scrooges habits. He, also, referred to Maqamat Badi’ AlZaman AlHamadhani which is a book that includes masterpieces in prose with sarcasm and criticism.

AlSaba’ believes that humor does not adjust and address the distorted behaviors only; it has, also, many psychological and physical benefits. Those benefits were indicated in the book of Husain Ali Lobani AlDamooni; “AlMalaf AlSeri Llnuktah AlArabiah; The Secret File of Arab Jokes”, some of which are expulsion of toxins, burning fat, strengthening the immune system, activating the movement of intestines and digestion, alleviating the arterial pressure, eliminating insomnia and urging the body to excrete endorphin which is the hormone that creates a sense of well-being. He ended the lecture reading seven samples of his satirical poems that made the attendance laugh.

Mohammad AlMarzooq, a journalist in AlHayat newspaper, wondered about considering jokes as satirical literature. The lecturer referred to the types of social and political jokes and the possibility of categorizing them with the satirical folklore or with satirical literature if they aim addressing certain issues.

At the end of the program, Jafar Alshayeb, the Forum’s sponsor, thanked Hasan AlSaba’ for his enriching lecture and the attendance for their interaction.