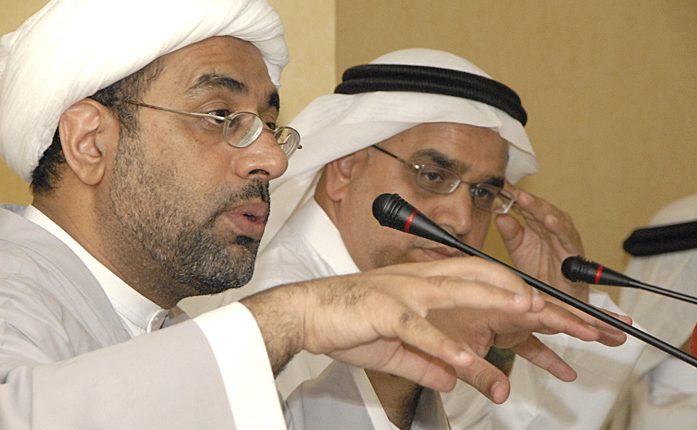 In the evening of Tuesday, Dhu Alqa’dah 15th, 1430AH, corresponding November 3rd, 2009, Althulatha Cultural Forum in Qatif invited Sheikh Ali Al Mosa to deliver a lecture in “The New Techniques in Arab Poetry”, and in which he reviewed Badr AlSayyab’s poetry as an example. This review was his master thesis which is entitled “Sense of Anxiety in Badr Shakir AlSayyab’s Poetry”.

Badr AlShabeeb, the moderator, introduced AlSayyab’s different life stages, and referred to Al Mosa’s approach in defining reasons of anxiety in AlSayyab’s poetry as being an orphan in an early age, poverty, having chronic disease, failing in finding love and suffering from exile as well as the constant presence of death obsession. He, also, mentioned the external factors like shift of literary and intellectual references, control of economic classes, confrontation of tight social traditions and witnessing many political transformations in the whole world.

Sheikh Al Mosa defined the term “techniques” which is styles and forms that were used in old Arab poems like similes and metaphors, and are used, now, in modern Arab poems beside other new styles and forms that were borrowed from other literary arts like stories, novels and cinema. The speaker indicated that AlSayyab’s utilization to those modern techniques in his poetry made him the pioneer in modernity by the critics; he developed more than twenty techniques that were not easily accepted by other coeval poets like AbdulWahab AlBayyati and Nazik AlMala’ekah.

Al Mosa introduced those techniques in detail, and the first one was the poetic image which has branches; representation, embodiment, mixing paradoxes and flashback as well as internal monologue and symbolism. He talked elaborately about symbolism technique which highly distinguishes AlSayyab’s poems, and referred to AlSayyab’s political, religious, literary and folkloric symbols as well as his legendary ones.

Moreover, he talked about other techniques in AlSayyab’s poems like rhyming and mixing diverse forms of expression like including different types of poetry and prose in the same text. The speaker reviewed the factors that enhanced AlSayyab’s experience in poetry like his erudition of ancient and modern Arab poetry and Western literature as well as his movement between different poetry trends; the romantic, the realistic and the subjective. Al Mosa, also, indicated the factor of originality and boldness of expression in AlSayyab’s poetry through which he was able of mixing modernity with heritage.

Badr AlShabeeb wondered about the term of “anxiety” and its relation with the mentioned techniques which might be used by other poets without having any kind of anxiety. The lecturer indicated that anxiety was highly present in AlSayyab’s poems; as a term and as an influence. He affirmed that through his readings to AlSayyab’s texts he discovered a kind of reflexive anxiety, and it is, also, proved by his medical reports.

It is worth mentioning that Ghilan Badr AlSayyab has been a guest in this program. He pleased by the Forum’s interest in many intellectual fields in general and in literary fields in particular. He, also, participated in answering some questions without overstepping the limits of his father privacy.