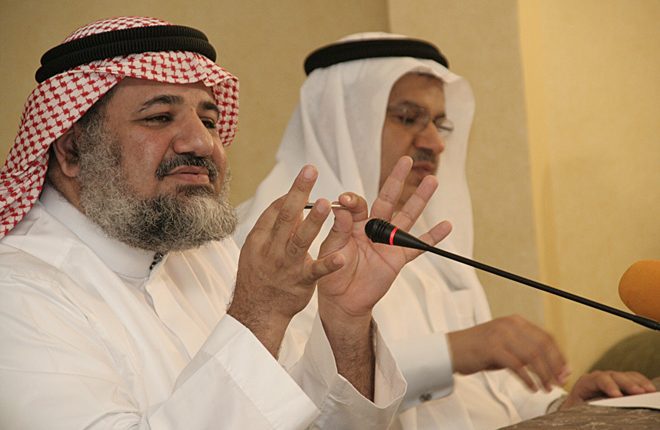 In the evening of Tuesday, Jumada AlAkhar 9th, 1430AH, corresponding to June 2nd, 2009, Althulatha Cultural Forum in Qatif invited Dr. Adnan Jam’an AlZahrani from Jeddah to lecture about “Moderation Discourse; Why and How?”. The program was moderated by Jafar Alshayeb, the Forum’s sponsor, who initiated it by wondering about the reasons of moderation absence in our Eastern societies and the prevalence of a state of extremism and tension. He, also, wondered about the reason of moderation discourse weakness, and if it was a necessity for developing societies and having a state of stability and civil peace. All of that requires working on developing such kind of discourse and exploring its fields, domains and challenges that confront it.

Alshayeb introduced the speaker who is a lawyer specialized in legal counseling in Jeddah, and holds a doctorate degree in Laws of Electronic Commerce in Islamic Jurisprudence from Umm AlQura University, Saudi Arabia. He has many works such as “The Role of Colonialism in Enforcing Positive Laws in Islamic Sates”, “The Miraculous Legislation in Islam”, “The Basis of Excellence” and “Islam; a Doctrine Without Complexity”, besides many studies like ” Nullifying the Ablution by Touching the Genitals” and “Paying the Share of Zakat”.
AlZahrani defined moderation discourse as “compromising between two contradictions”; then, he explained compromising that can be determined through the description of others to the individual as moderate; not through the individual seeing him/herself as so. He stressed that there is not any extremist who admits his/her extremism.

The lecturer talked about the lack of alternatives to moderation indicating that extremism is a rejected alternative referring to the Qur’anic that call for moderation “say the truth even if a near relative is concerned” Surat AlAn’am, verse 152. He, also, indicated that world is in a press need for moderation discourse in order to have justice and get rid of oppression.

The lecturer discussed the approach of achieving moderation through “good companionship”, and emphasized the importance of promoting this culture through neutral reading and cognition which may protect the individual from radical visions. He confirmed the significance of traveling in increasing knowledge through recognizing different civilizations and cultures.

Dr. Tawfiq AlSaif pointed to the seriousness of the idea mentioned by Dr. AlZahrani within his personal experiences in reaching moderation concept as a conduct. He, also, referred to its oddness because it calls for liberalism which does not consider the opinion of the group as an absolute standard. AlSaif asserted that recognition of diversity is one of the significant principles of liberalism, and believes that it is the right approach for establishing a peaceful social system.

Eissa AlSharji, a writer and an intellectual from Bahrain, added that it is important to be careful from calling liberalism with tolerance. He admitted that both of them agree upon the need of respecting others through providing them the opportunity of expressing themselves without questioning their intentions.

Ibrahim AlShayeb wondered about the way for protecting the rights of the others who are not capable of having justice in a civil state. The lecturer stated that moderation shall be in minds before the state, and called for not depending on a state or a system in achieving the required moderation.

As for Mohammad AlMahfoudh, he mentioned the identifiers of moderation, and he believes that it is the outcome of traditional, cultural and political transformation in any society which all of its individuals describe themselves with it due to its positivity. He mentioned three of those identifiers; accepting all levels of diversity, recognition of human rights and equalizing the self with others. He, also, emphasized the necessity of having a national project in each society that is capable of integrating all of the society’s components within a unified national approach.

Other interpositions and comments made by intellectual elites from various Saudi regions and Bahrain like Abdullah AlZahrani from Jeddah, Redha Rajab, the Chairman of Altajdeed Cultural and Social Society, and Jawad AlAsfour, founder of Bahrain Center for Human Rights. All of them were welcomed by the Forum’s sponsor who referred to the program held in Riyadh in the same evening and which gathered groups of Qatif’s and Riyadh’s intellectuals; headed by Sheikh AbdulRahman AlMuharaj.