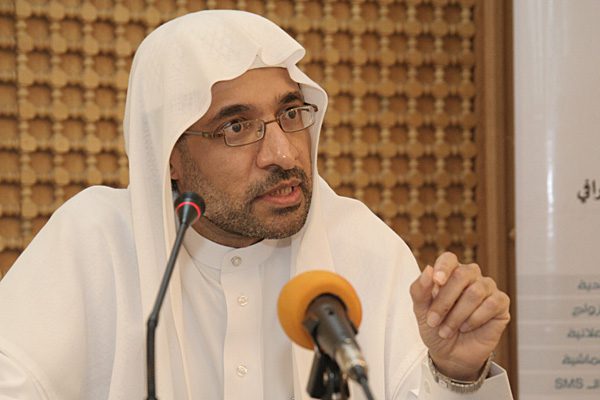 In the evening of Tuesday, Jumada Alakhar 16th, 1430AH, corresponding to June 9th, 2009, Althulatha Cultural Forum in Qatif hosted Zaki AlMilad to review the dimensions of cultural development in Saudi Arabia. AlMilad was born in Qatif, and is a researcher specialized in Islamic thought and an academic counselor in the International Institute of Islamic Thoughts in the United States.

Mohammad AlShioukh, the moderator, pointed to the difficulty of recording all of the cultural transformations in Saudi Arabia; especially in the last three decades, due to the wider extents of those transformations that resulted from several internal and external factors.

AlMilad confirmed the significance of Eastern Province’s position in the overall status of the Saudi cultural situation referring to the cultural transformations in the past ten years. He asserted that they are the most important developments in the cultural history of the region proving that through referring to three essential features in the regional cultural status. He indicated the first feature which is the publishing of a large number of cultural magazines and periodicals that provide knowledge more than history and literature commending the achievements of AlWaha and AlKalimah quarterly magazines which proved their capability of constant intellectual development.

The lecturer referred to the second feature which is the appearance of a huge number of private cultural forums through which intellectuals were capable of introducing themselves and communicating effectively  with other highly educated groups. He noted the challenge that cultural forums confront in maintaining development and progress and avoiding resemblance with others.

AlMilad mentioned the third feature which is the remarkable progress in quality and quantity of writings and publications. He indicated that his progress revealed a new intellectual discourse that kept pace with the new developments and communicated with various types of human knowledge.  All of that contributed in raising the number of the intellectual works.

He reviewed the impacts of those features in restraining the cultural problems such as cultural dependence on the outside, cultural inertia, cultural marginalization and cultural rapid evolution which made the region incapable of keeping pace with cultural developments. However, the region eventually prospered and achieved significant cultural accomplishments at the national and Gulf States levels.

Fu’ad Nasrallah talked about another feature of local cultural development pointing to websites role in spreading education and culture. He attributed the dependency which was indicated by the lecturer to the difficult circumstances that confronted the region in the past and prevented it from the simplest cultural activities like publishing a book or a magazine.

Wajdy AlMubarak mentioned that although the region had achieved a distinctive cultural development, it still at the starting point because culture is still limited to intellectuals; not all of the public. As for Husain AlAlaq, he talked about the need to a new bold approach that deals with the society’s issues properly.

Abdullah AlAbdulBaqi talked about the youth generation as an essential pillar in culture referring to the enormous gap between them and the previous generation. He, also, called for reconsidering the impacts of modern communication means over the youths like cyberspace. Jafar Alshayeb, the Forum’s sponsor, emphasized the necessity of exploring and evaluating the local status in different political and social fields in order to create significant transformations that are capable of confronting the contemporary challenges.