AlNasir Presents the Role of Oil in Cultural Transformation 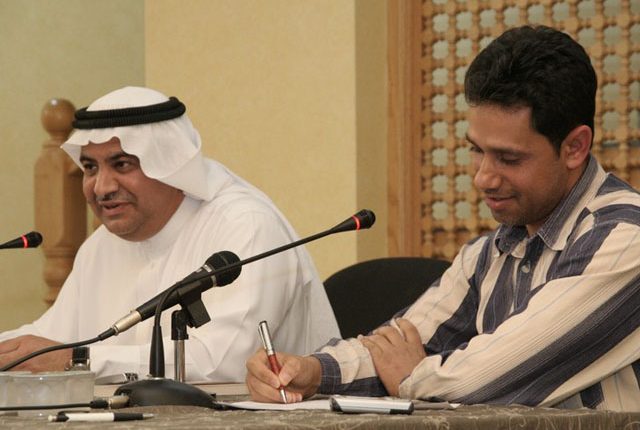 In the evening of Tuesday, Rabi Alawal 6th, 1430AH, corresponding to March 3rd, 2009, Althulatha Cultural Forum in Qatif invited Eid AlNasir to review the role of oil in cultural transformation in the region through his novel “Hasshassat Atturab”; The Swish of Sand. AlNasir who was born in Saihat, Saudi Arabia, in 1958, is a critic and a writer, and, currently, heads the Society of Culture and Arts in Dammam. Lately, he published a critical book about many novels and stories in the region and entitled “Masks of Fear” in which he presented the problems in the Saudi cultural and social structure.

Jafar Albahrani, the moderator, welcomed and introduced the speaker. He presented a quick review to the novel in which the protagonist goes within a family trip to Ras Tanura in Saudi Arabia, then, he goes in another trip in which he travels to ancient times that the region went through; the eras of giants, Phoenicians, Qarmatians and Abbasids. He talked about the disputes between Bani Hajer and Bani Khalid tribes which ended with Bani Hajer migration to Alnabia presenting critical pieces about the past and the current reality in which Saudi Aramco Oil Company has a distinct presence.

Albahrani raised a question to AlNasir over why he did not concentrate in his novel on the paradox between the rich, educated American community who controls Armco and the poor, illiterate, and conservative local society with all humanitarian and professional relations within the significant cultural transformations.

AlNasir mentioned that there are always certain circumstances that controls the process of texts writing indicating that he used the picture of “Aramco Company” in his novel to show the conditions of the region’s people who work for it. He affirmed that thrill and enjoyment are essential elements in his novel in which the protagonist says to the children “I see what you do not see” or “I hear what you do not hear”.

In the novel, the writer used the old local dialect to achieve certain purpose, and indicated that the language was spontaneous and real to reflect social and cultural transformation which is due to the expansion in the extent of knowledge and human relations. He admitted that he employed some social and psychological effects to support the critical sense in the novel.

The moderator pointed that AlNasir, in his novel, is influenced by the writings of James Joyce, the leader in writing modern novels, and wondered if AlNasir wanted to criticize himself personally. AlNasir cleared that there are literary productions that are capable of changing the track of literature as “Ulysses” novel by James Joyce which he wished that he had read it before he started writing his novel.

Mohammad Aleesa, one of the attendants, suggested speaking about another novel for comparing AlNasir’s novel with other ones, and mentioned many local novels in which authors had written about the history of the region such as “AlAdamah” by Turki Alhamad and “Abu Shelakh Albarma’ee” by Dr. Ghazi AlQusaibi. He wondered about the reason of why AlNasir indicated the minor transformations in the region instead of the major ones which can be reviewed properly through lengthening the novel. Aleesa, also, raised a question over the role of the region’s authors of the previous generation in writing about their region in the light of the decrease of political and social fear from exposures.

The lecturer responded that he described the region in many and various pictures referring to the part in which the grandmother narrates the movement of workers to their work places, their sufferance in Aramco’s compounds in which many labor oppression cases were reported against Arab workers. Over writing about the region, the lecturer indicated the attempt of the author AbdulRahman Muneef and expressed his dissatisfaction with what had been written because Muneef did not have an integral information about the region.

Zaki Albaharnah wondered about the extent of cultural and social transformations caused by oil discovery and the way of how can this changes in social relations be understood by the current generation which did not live in that period of time. In response, AlNasir pointed that he reported the period when the people worked for few dates which are not even enough for a day in compare with the transformations in life due to oil discovery whether in education, economy or politics.

He described some of these transformations as dangerous because it resulted in a disconnection between the reality in the twenty-first century and the values of the past fourteen centuries, and called for turning back to the past and look for human and social values that can serve our current life requirements.