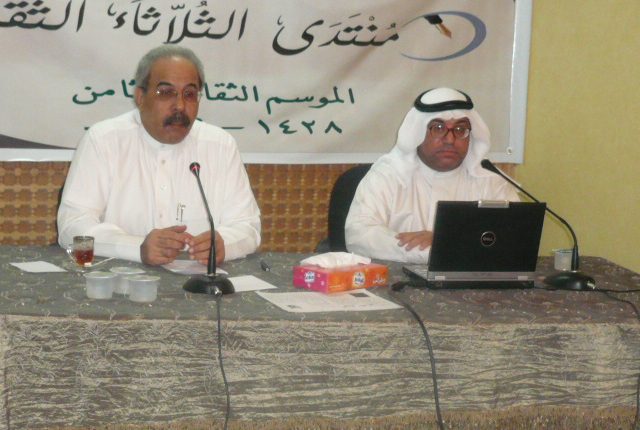 In the evening of Tuesday of Jumada Al-akhar 13th, 1429AH, corresponding to June 17th, 2008, Althulatha Cultural Forum in Qatif hosted Abbas Ahmad Mahfoud, the Vise Chairman of the Central Province Municipal Council in Bahrain, to review the municipal council’s experience in order to exchange experiences in all different social and cultural aspects. Saeed AlKhabaz, the moderator, introduced the speaker who holds a master degree in public health from Glasgow University in Scotland and is a member in the municipal council for the second term successively since 2002. He is, also, the founder and the chairman of Toubley Charitable Fund, as well as founding member in AlBayan Cultural Society in Toubley and AlWefaq AlWatani Islamic Society. Besides all of that, he is a member in the municipal board in Toubley and the secretary of its arbitration committee.

The speaker thanked Althulatha Cultural Forum, especially its sponsor, Jafar Alshayeb, for inviting him within the work context as both of them are municipal council members and he referred to the accumulative nature of the collective work because it is the outcome of collective partnership in which people directly participate in decisions making process.

The speaker mentioned that five municipal councils exist in Bahrain for five provinces and he spoke about Bahrain’s population composition concerning age and nationality, as well as the percentage of nationals in comparison to the foreigners’ which is still considered a high one. He mentioned the reason of reviewing this composition as it is one of the most important factors on which the councils determine the nature of their activities and projects.

Moreover, the speaker discussed, in detail, the specializations of municipalities’ law such as recommending systems that regulate executing the municipality’s projects, supervising the public utilities and all of works attached to them, as well as demanding reports, data and statistics that are needed for a constant supervision besides reviewing the recommendations offered by ministries and putting them into consideration.

Mahfoud, also, referred to the municipal council authority in inviting managers of administrations to attend its meetings without having the right to intervene in adopting any resolution by any means and they must accept the resolution made to be raised into a specific minister to be agreed upon. Then, he pointed to the mechanism of pursuing this resolution whether accepted or not in some high committees like Construction and Housing Committee which is headed by Bahrain’s Crown Prince as well as the High Committee for Coordination between Councils, Ministry of Municipalities Affairs and coordinative committees in each council.

The speaker mentioned their attempts in overcoming the obstacles when dealing with the official authorities in order to achieve the aim of collective partnership which is sought by municipal councils to boost the communications with the citizens. He stated that the councils approved on the appropriation of BD10, 000 ($26,666) for each council to activate the institutions of the civil community.

Each council has founded its own website, issued periodical handouts and participated in some events and social committees like Health Support Council which determines health policies for the Kingdom, and the Committees for Protecting the Environment.

Those municipal councils achieved many goals; issuing resolutions, editing panels and executing plans and projects. The speaker referred to some of these resolutions like organizing the work of peddlers, eliminating unlicensed barns, removing falling-down houses and many others.

As for the achievements, they were represented in hindering misfeasance which existed in the systems previously, in projects of protecting the environment, paving roads, establishing health centers and many more.

Although the municipal councils in Bahrain achieved a lot of goals, they still face some obstacles. The lecturer mentioned that these obstacles are the absence of essential services in many regions which their infrastructure need to be developed, the deficiency or the routine of some articles in municipal councils’ system and misunderstanding the limits of councils’ authorities.

Moreover, Mahfoud emphasized on the importance of providing the elected member vacancy for the municipality membership as it is a significant factor in regulating the work of the municipal council. He, also, called for cooperation in implementing projects for public interest and not surrendering to pressures but trying to find solutions and substitutes.

The attendance commended the speaker’s presentation as well as the achievements of municipal councils in Bahrain. Jafar Alshayeb referred to their obvious progress due to the wide range available of authority for which the Saudi councils lack, and consequently that led to their deficiency of working productively and seriously.

As for Nabih Alibrahim, Vice Chairman of Qatif Municipal Council, conformed that the Saudi municipal councils are unable of making any progress by depending on a weak budget and inactivated authorities, and he stressed on the municipal-work need for a political will and intention.

Mohammad AlSinan mentioned that the performance of municipal councils in Bahrain resembles the performance of those in developed countries and wondered about the system of designating members; whether it is confined to election or not. The speaker assured that election represents the society although it might lead for weakness in the adopted list; however, working collectively may satisfy these insufficiencies.

At the end, the Forum presented the works of the promising artist, Kumail Mohammad Almosali. His father, Mohammad Almosali, introduced him, spoke about Kumail’s experience and stressed on the importance of parents’ roles in discovering and encouraging their children’s talents.