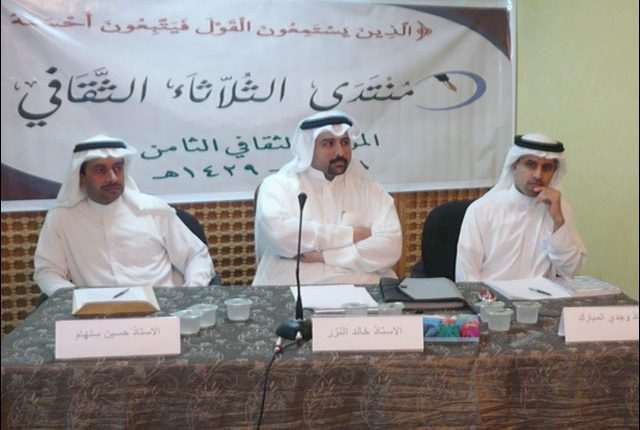 In the evening of Tuesday Rabi Al-Akhar 10th, 1429AH corresponding to April 16th, 2008AD, Althulatha Cultural Forum in Qatif invited three writers to review Qatif’s history; Hussain Selham, Khalid Al-Nazer and Wajdy Al Mubarak. The program was moderated by Zaki Al-Baharnah who introduced it by mentioning the significance of knowing the contents of national legacy and the most important ways to achieve that. He stressed on that holding such seminars is one of the ways that would revive the spirit of being capable of making the active presence to make history deserves to be glorified.

The moderator introduced the speaker starting with Hussain Selham who was born in Saihat, Saudi Arabia. He has received a bachelor degree in Business Administration and published some of his writing works in AlYaum newspaper. He issued many historical books like Saihat’s History, Saihat and the Sea, The Saihati Society, Qatif Ahlulbait, Qarmitians Coast and Historical Study on Qarmitians of Hajar.

Khalid Al-Nazer was born in AlKhobar and joined the history department in Beirut University in 2004, then, he moved to U.S.A to finish his study in history. Besides his writings, he issued a book titled “Al Asfour: A Family Ruled The Gulf for 150 years” and “Bano Lam in Alahssa”.

As for Wajdy Al Mubarak, he was born in AlAjam, and received a bachelor degree in geography from King Saud University in Riyadh and a diploma in managing intermediate and secondary schools. His articles were published in AlYaum newspaper and in different websites. He wrote a book named “AlAjam: Yesterday and Today”.

Hussain Selham started the program by speaking about how history can be organized referring to two ways; collection and verification. He mentioned that collecting is the way which is currently used although it is useless, and compared it to moving in a vicious circle. That provided the region’s enemies, who distorted some of its history, with undetected claims starting from the Umayyad rule and ending with the Ottoman government. He emphasized on that the verification way is the right one for gathering history.

Hussain Selham mentioned the difficulties that face historians like the demographic changes on the region’s cities and villages, and he mentioned Qarmitians abolition to the great city of Hajar as an example for that. This abolition made the historian and geographers unable to specify its location. The lecturer reviewed the opinions in this case, and stated that many historical facts were lost because the subsequent historians depended on gathering. He, also, cited that the demographic change did not stop on cities and villages but it went beyond to reach population who was forced to leave their lands because of the oppressive systems and rules.

Moreover, Selham considered the destruction of the historical legacy that happened in the second century AH as another difficulty faces the historian and one of the reasons of Qatif’s history loss. He motioned that many historical libraries were burnt and important manuscripts were lost, and then were replaced with books written by mercenaries pursuing sectarianism in their writings where their books were followed and became the main sources for the history of the region.

Khalid Al-Nazer talked about the conditions of historical writings in the region mentioning all different and various definitions of history and he reviewed the diverse theories of history beginning and subsequently archeology which reached Muslims by the west, as well as its connection to medicine which evolved through the last two centuries. This made some historians use the medical tests to analyze some biological findings.

After that, the lecturer spoke about the history of Qatif, where he referred to the lost historical gap that lasted for a thousand year and the difficulty of depending on what had been written about it. He mentioned some historical books used as sources like AlTabari, AlYaqoopi, Ibn Khaldoon History and others who lived in the late centuries and those historians who followed them like Ibn Bisher, Ibn Ghanam, Lam’a Alshihab and Ali the Bahraini merchant.

Moreover, AlNazer spoke about history writing in the region, where he mentioned that there is no historical writing by local historians except the divan’s explanation to the poet Jamal aldin Ali bin Muqarab AlAyouny which considered the most important and ancient historical document about this region. Although of that, it was not meant to be for history as much as to describe the region’s political and social situations. There are some people contributed in transforming some events verbally which helped some writers to gather them. Some of those writers are Sheikh Hamad Al-Jasser who some writers depended on him in their books like Muhammad Saeid Almuslim in his book “The Black Gold Coast” and the historian Muhammad Al AbdulQader in his book ”The Masterwork for the Benefited of Alahssa New and Ancient History”.

In conclusion, AlNazer spoke about the importance of preserving history and accepting all of it because refusing some of it leads to its distortion, and he called everyone to codify the historical information circulated by parents to be the source to their children after them, following the approach of the Holy Qur’an in historical narration.

Wajdy Al Mubarak spoke about his experience in his book “AlAjam: Yesterday and Today” and his perception to the region’s history. In the beginning, he mentioned that most of the available historical books and researches are conventional like the book of Muhammad Saeid Almuslim who depended on gathering not verification. He added that the rightful elements for history formation; they are seeing, narration and archeology. He considered the last element is the most important one because it is the only witness that can not lie or distort the facts, however, he stated that there is no real science in Qatif interested in archeology as an important source for facts sources.

Al Mubarak reviewed his opinions about the current researches in the region. He thinks it is individual and does not go along with collective work which reflects diversity in thoughts and ideas. He stated that there are some people who misuse researches and that cause ineffective arguments. He, also, spoke about his experience in writing his book “AlAjam: Yesterday and Today” in 1414AH/1994, where he was shocked by the lack of documented information about this town. So, he started to write his historical book which took six years of research and he faced many difficulties in them.

Further more, Al Mubarak referred to the new dynamics that he depended on in his experience like raw average hypotheses, the demographic growth, the demographic pyramid and census which is not found in other historical books. He mentioned that he followed the scientific way in research although there are no sources and references.

He explained “AlAjam: Reality and History” program which was viewed in AlAnwar Satellite Channel on three parts. He expressed his opinions over some sections in it. The most important one was his opposition to AbdulKhaliq Al-Janabi’s opinion over that Prophet Alyasa’ grave is the same grave of (Ria’ab Alshenni), which is believed as a prophet of his people which is based on some weak narrations. He, also, reviewed his method in research that led him to this result but without any real proof.

Moreover, the lecturers and the attendance discussed what was said about Hajar’s boarders and about some adopted historical books like Ibn ALMuqarab AlAyouny’s book. Then, Jafar AlShayeb spoke about sectarianism in historical books and he hoped that objectivity and neutrality are adopted to accommodate the differences in viewpoints. He, also, stressed on the importance of collective work idea, which was mentioned by Wajdy Al Mubarak, in contrast to the common individuality in historical research experiences. He suggested founding a center for specialized studies in this concern. Moreover, Ahmad AlSadiq proposed establishing a forum for whom interested in historical research and archeology to share their experiences.

Dr. Jamil AlJishi, a former member in Majlis AlShoura (Consultative Council) commented on the presented papers and he called for more objectivity when dealing with historical issues especially in Ottoman government history and its relationship with the region.

Yaser AlKhamis spoke about the need for objectivity and the importance of making sure of narrations and cultural backgrounds of the narrators. Moreover, Adel AlGhanim wondered about a location has subterranean relics help in writing the history of the region. The researcher, Salman AlRamis, mentioned that Tarout city is filled of historical relics that considered as a real witness for writing its history.  Wajdy stated that AlAjam is older than Tarut and proved it with (Nama law) that put AlAjam in the second position after Tarut of populated areas in Qatif.

The Forum, also, dedicated an area for Qatif Photography Group to present samples of their work over two weeks. Yaser AlDibaisy, a member in the group, spoke briefly about the group’s activities which were started at the beginning of Muharam, 1418AH/1998. He, also, mentioned that it is one of the artistic groups that are attached to Qatif Art Club which was the outcome of the cultural committee in Qatif Social Services Center.