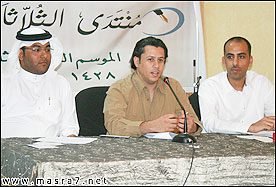 In the evening of Tuesday, Jumada AlAkhar 6th, 1429AH, corresponding to June 10th, 2008, Althulatha Cultural Forum hosted Afan Theatrical Group to speak about “Drama in Social Awareness”. Mosa AlHashim, the moderator, explained the role of theatre’s stage in representing the reality of a society as a mirror reflects its most important aspects without being confined to entertainment. Then, he introduced Afan Theatrical Group which was founded in Saihat in 2000 to create a high-class theatre in the region and its mebers include Abdullah AlJafal, Haytham Habib, Mohammad AlHalal, Husain Yousif, Zaki AlDebais and Mohammad AlSaba’. Afan Group participated in many activities regionally and in the Gulf countries and some of which are Rehlat AlEid; The “Eid Trip”, in a collective marriage stage in Saihat, Hikayat Mushafrah; “Encrypted Tales”, in The Second Gulf Artistic Festival in Bahrain and Heena Yansakeb Alma’; When Water is Spilling, in Jiser AlTawasul Festival in Jordan. It, also, participated in the operetta of Arab handball championship opening ceremony in 2007, in Dammam; Saudi Arabia. The Group was awarded the best directed work in the Open Theatre Context which is organized by Dammam Cultural Society.

At first, the moderator introduced Haytham Habib who is a journalist in Riyadh newspaper, and holds a bachelor degree in mass media, specialized in broadcasting and television, from King Saud University. He worked as an assistant in Abtal AlHurob; “Heroes of The Wars” T.V series, and he wrote several plays that have participated in many events and festivals in Saudi Arabia.

Then, AlHashim introduced Nasir AbdullWahed who is a financial consultant in AlJazira Bank. The beginning of his theatrical work was in AlKhaleej Sport Club, then he joined Afan Group in Nadi AlFareej; “The Neighborhood Club”, and he wrote some plays for the Group. Currently, he is the supervisor of the theatre section in the electronic AlKhaleej Club Forum and AlSahel AlSharqi Forum.

As for Mohammad AlHalal, he is an art teacher holds a bachelor of Fine Art and has written many theatrical scripts and was the director and the scenographor of numerous theatrical works.  Moreover, AlHalal composed many lyrics to theatrical children songs, participated in several art exhibitions and won three successive theatrical awards.

Nasir AbdullWahed introduced Afan Group by mentioning how this group was initially founded and the reason of calling it with this name referring to that it was one of Saihat city old names and which means Palm trees and water. Then, he briefly presented the Group’s works which started with Rehlat AlEid in 2000.

Abdullwahed referred to the Group’s futuristic plans mentioning that the Group looks for presenting short films but it still preparing for that. He, also, spoke about the Group’s new experience of presenting a horror play on the theatre of Culture and Art Society in Dammam and referred to that their readiness to participate in Short Plays Context in Ramadan which is organized by the same Society. He, also, pointed that the Group considers producing a T.V series presented in local T.V channels.

However, Mohammad AlHalal explained, in details, the obstacles that confronts the Group referring to common people’s, and even elites’, lack of understanding to the messages of theatre which led to restraining the collective work in this field.

Then, AlHalal referred to the personal difficulties that face the actor himself. Those difficulties are represented by the absence of the supportive ground due to the lack of financial and moral support from the society’s figures like businessmen and officials. Therefore, he hoped that they encourage and appreciate the efficient potentials in the region where there are highly competent acting cadres, writers of good scripts and high quality scenography; the art of theatrical designing.

Haytham Habib hoped that people who are financially willing make the initiative of building a theatre accommodates these competences because there are no such equipped theatres in Qatif until today, except the theatre of Social Services Center which is often difficult to be reserved. The Financial obstacle is the most difficult one that faces the Group in providing the show requirements and the show itself which is mostly free or with low-cost tickets that might be considered expensive by some people although they pay many times more to foreign shows than to Afan despite their recognition of Afan Group precedence.

On the other hand, Nasir AbdullWahed commended some sides that had supported the Group like Culture and Art Society in Dammam and AlKhaleej Club which presented many theatrical works in their festivals like AlWafa Festival and Sanabel AlKhair Festival which allowed the Group to participate with their works. He, also, thanked Imam AlHusain Parade for offering them the opportunity of presenting their religious shows in the related religious events.

Then, a visual presentation was showed includes some parts of the Groups works besides some commemorative photos in different occasions, advertisements of the works pictures as well as the Group’s appreciation certificates.

Jafar AlJishi objected the statement of Mohammad AlHalal in accusing the elites with the lack of appreciation. He referred to their massive presence in the shows of theatrical contexts that are organized by Culture and Art Society besides organizing many theatrical activities by the intellectual themselves as seen in the cultural trip which is sponsored by AlWa’ad Cultural Meeting and which is supervised by Husain AlJafal. However, he agreed with him on the absence of financial support which the Group is in need for it, and consequently there is absence of theatrical culture. Therefore, he called for founding cultural center contributes in boosting this culture and other ones. He, also, wondered about the position that the Group sees itself in the light of its adoption to two approaches in its theatrical work; the experimental approach and the social approach.

Mohammad AlHalal mentioned that the theatrical approaches that the Group follows do not conflict with each other. He referred to its persistent attempts in closing up the society to the experimental theatre through including everything that may deliver its notion like drama and gestures, as well as, considering the visual component as one of the most important components in the experimental theatre.

Zuhair AlSoaimel mentioned that he is proud of Afan Group as an honoring example shows serious and organized work. This is because the Group held the responsibility of presenting constructive art and it has worked hardly to achieve that since it was founded. So, he expects that it will have a bright future despite the barriers that faces it.

At the end, Abdullah AlJafal referred to the obvious absence of drama and art among the interests of intellectuals. This situation is expected due to the lack of interest of drama in all school and academic levels. However, the drama actor must confront this difficulty and try hardly to prove his high capability which the society would believe in someday.

The moderator pointed to the book of the week within the cultural corner; “Jurisprudence of Sharia and Life: Speculations in Texts and Reality” which is one of Noor AlQur’an book series by Sheikh AbdullGani AlAbbas and Sheikh Faisal AlAwami.