Althulatha Forum Presents the Art of Music and Chanting 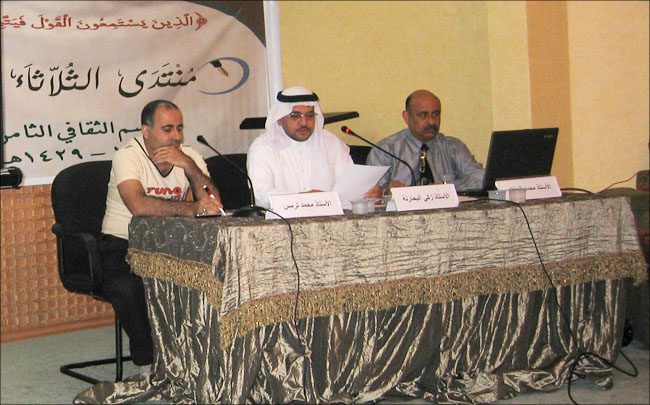 In the evening of Tuesday of Jammada alawal 1st, 1429AH corresponding to May 6th, 2008AD, Althulatha Cultural Forum started a seminar about music and chanting as an artistic dimension and mentioned their messages, outcomes and role with presence of professional musicians like  Muhammad Al-Sinan and  Muhammad Termis.

Zaki Al-Baharna lead the program and introduced the presenters. Muhammad Al-sinan is a musician studied music on the hands of Tawfic Jad, the late Jordanian Maestro and participated in many international festivals like Oscar Pictured Songs Festival and Arab Pioneer Festival in Saudi Arabia in which he is, also, a member of the founding committee. He was hosted as a member of arbitration committee for (Nojoom Alarab) T.V program and received many awards and he was honored for his efficient role in many festivals and events.

Muhammad Termis, the second speaker, is a Lebanese musician who studied composition and distribution of music at the National Institute of Higher Conservatory of Music in Lebanon where he acquired a diploma certificate in music. He, also, studied theatrical directing the Academy of Cinema in Lebanon, and directed plays like “Blood and Victory”, “King of The Time”, “Muhammad the Messenger of Allah” and others. Moreover, he worked in different satellite channels and wrote graphic music for some works like Farewell, Return to Allah and My Heart Called You.

Muhammad Al-Sinan started his speech with emphasizing on the importance of music in everyday life, which is proved by its presence in different mass media whether visual or audio. Then, he spoke about what Henry Farmer, the author of Arabian Music History, had written, where he described it as the only language known by all of the world of different races, colors and languages, and every one of is filled with its tones which are like birds chirps, trees rustle, breeze blowing, roaring surges and so on. He affirmed the fact that is nothing in the universe does not have its own sound.

After that, he mentioned the origin of the word music “mosiac” which means the voice of nature in Greek. Then, all world languages derived its own words from it which are similar to the native one. He, also, talked about the history of music which was started by human observation to nature’s sounds, then imitating them. They observed the sounds made by setting up animal’s leathers on hollow wood, the passage of air through hollowed bamboo plants and the variety of these sounds according to different sizes, lengths and hollows of that plant which eventually lead them to make the flute.

Al-sinan, also, mentioned that music accessed the Arab World through the Persians and Greeks before the rise of Islam. He spoke about its presence in Yemen during the fourth century AD. Music bloomed as poetry flourished which contributed in the prevalence of singing and singers, and all of that reached AlHijaz through imitation. He, also, stated that people of AlHijaz focused on poetry not music because of their inferior perception to this art at that time. Moreover, people who practiced it were not Arabs but Persians lived in Yemen since the Persian colonialism; most of them belong to the inferior class of illegitimates.

After that, the lecturer talked about a sensitive phase where these arts weakened in the last days of Abbasid era because of the Turkish control on the political affairs and its call for return to Islam. It fall down at the hands of Holagu, the Mongol Commander, and this art faded in the Arabian region but remained in Andalusia and in the west Arab countries which revived the Andalusian arts like stanzas and Sufi singing.

Further more, he spoke about music effect on people according to some philosophers, sages and scholars, and talked about Konvicos, Plato and Sheikh Hasan Al-Attar point of views. After that, he physically explained music’s capability to penetrate the man’s body and spirit and stated the fact of the influence of a vibrated body on another. Then, he mentioned some experiences done by Greeks and Chinese philosophers on solid material, plants and animals. They discovered the emotional impact and they confirmed the ability of rhythms and tones to affect them profoundly. They proved that by the results of their experiences, music can increase agricultural and animal production. That motivated some modern countries like India, Netherlands and Britain to depend on music instead of Hormones to increase production in some fields.

Al-Sinan, also, spoke about the types of Western music in general and about their functions and properties of each of them. Then, he surprised the attendance with his statement of that Arabian music is still not born yet although there are some attempts for Arab musicians to present an individual Arabian music.  Al-sinan named some musicians like Muhammad AbdulWahab, musical compositioner and AlSinbati. He, also, reviewed some modern attempts such as of Nasir Shamma and his efforts to improve the Arabian taste level by setting up the Oud (lute) House in Egypt and United Arab Emirates.

He concluded his lecture by speaking about the wave of youth modern singing where he described it as rebellion at the existing social values that they could not interact with them. That’s because they could not discharge their own inner potentials and, in turn, the inability of society to join it in the cultural institutions. That led the young generation to use whatever they can use to prove their existence and force their society to recognize them whatever the means are.

In the second part of the program, Muhammad Termis spoke about his experience with chanting teams in the region and about chanting positive effects. He talked about the absence of the chanting culture in the region and the common perception of it and referred to the importance of having a great message in the chosen subject beside text, tone and performance, in addition to the importance of the spiritual relationship between the musical distributor of the text and the song itself. All of that creates sensitivity which in turn creates the tone which is not possible without knowing the text’s circumstances, the conditions of singing it and the chanter’s potentials.

Termis, also, spoke about the obstacle of religious constraints awareness when dealing with the art of music and chanting. He briefly mentioned the experiences he lived and that needed knowledge and religious education to overcome them. Moreover, he covered some topics such as wrongly dealing with constructive criticism, the absence of talent and creativity, tones thefts, ego-control and the ignorance of the simplest rules and pillars of this art. He proved that by mentioning their inability to differentiate between Opera and musical chanting.

The attendance’s interpositions were almost wonders about the reason of the variety in the taste of Arab music listeners, and about the future of Arabian music. Mohammad Al-Sinan indicated the difficulty to spread Arabian music because the West is not used to Arab musical notes. Their musical instruments do not produce them since four centuries like the quarter-tone and the one eighth-tone. Further more, some interested audiences discussed the possibility of activating the direct music playing on stage in chanting concerts instead of using recordings with Muhammad Termis.

The Forum, also, reviewed the works of Arabic Calligraphy Group in Qatif within the sub activities of the Forum in introducing the region’s art and artists.  Mustafa Al-Arab, one of the group’s members, spoke about their activities, the group’s position in the Arab area, awards and ranks obtained locally and internationally. As for the book of the week, the latest issue of the quarterly AlWaha magazine was viewed in the publication corner.