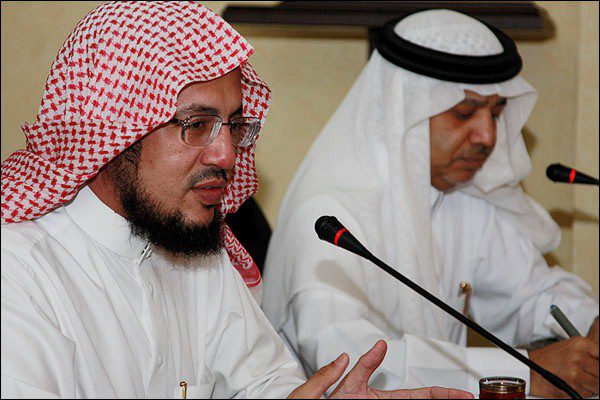 Althulatha Cultural Forum in Qatif socially receives Sheikh Muhammad Saleh Al-Dahaim, the former judge in Saudi Justice Department in Riyadh to lecture on religious pluralism and national unity. That was in the evening of Tuesday of Rabi Al-Akhar 23rd, 1429AH, corresponding to April 29th, 2008. The lecture was moderated by Fuad Naserallah who started by introducing the lecturer. Sheikh Al-Dahaim is a graduate at Shariah College of Imam Muhammad bin Saud Islamic University, and was educated by leading schoolars in the academic field. Besides being a judge, a legal and religious consultant, he devoted much time to his intellectual works. Moreover, he is the founder of the Cultural Revival Center and has written “Mentality of Fear and Reason of Confrontation” and “I Learned from Life”.

The moderator initiated the lecture by speaking about pluralism which is able to absorb all diversities and use them in creating unity to reach a stable situation in the light of social turmoil that the nation currently lives. He boosted his introduction with two intellectual readings. The first was an article written by Muhammad Al-Mahfoodh published in Riyadh Newspaper, in which he spoke about the outcomes of the jurisprudential and religious pluralism experience, historically; and referred to it as it was a way to division in the Islamic Unity. That’s proved by the presence of intellectual freedom and activity that led to the intellective political trends.

Whereas the second reading was from “Arabian Islamic Consensus, Reviews in Pluralism, progress and Development” by Muhammad Hasan Al-Ameen, in which he pointed to the scholars’ awareness of the reasons of Muslims unity at their first eras attributing it to the emergence of sectarian trends which offered Muslims the best way for scientific and logical debates.

Sheikh Al-Dahaim started the lecture discussing its title. He stated that pluralism is not a new concept, and people dealt with it so much which caused confusion. He, also, stressed on the importance of self-awareness while dealing with this concept by raising proper questions which will be answered.

The speaker indicated that the discussion has been concentrated on the marginal issues such as “nation” and “sectarian” and the central issues; “unity” has been ignored. He thinks that created confusion and confrontation; which should be dealt with properly by the cooperation of religious, political, economical and social intellects.

Sheikh Al-Dahaim explained the positions of Shariah and religion scholars; who have been divided into two groups; the religiously strict group who refuses to participate and the moderate one who does not want to get involved to be submissive to their audience and to maintain their interests. When speaking about “pluralism”, the lecturer stated that there is inadequate respect by some thinkers in dealing with other parties. He stressed on the importance of respecting the other as well as the individual rights, and he referred to the impossibility for a party to be the only right one because unity is the result of respecting all party’s rights and become a whole shared value as much as they get closer to each other.

He then referred to the origin of sectarian emergence and its historical conceptual accumulations; where people could not get rid of them. In his view, current circumstances need new understanding to the man’s mission on earth; which is prospering it and maintaining a good future for humanity and not only writing its history.

Furthermore, the lecturer spoke about the concept of unity, indicating that it is mistakenly demanded in the time of crisis and ignored otherwise. He explained that unity, in the context of pluralism, does not mean following a particular way and unified beliefs which eliminate the variety of intellects. It is, actually, maintaining three important elements; an acceptable belief which can be the common factor; moderate society which is capable of developments and an open-minded thinking analogy system. He, also, stressed on the importance of the particularity issues to each element in implementation and social conduct.

The lecturer mentioned that the concept of “nation” is still not unified although it is deeply rooted in most people minds, so, dealing a lot it word causes confusion to the youth generation who is still drawn by the cultural and intellectual transitions. He stated that the contrast between nation and pluralism is natural because of every human being is afraid of the un-acceptance of one’s existence and constancy.

He, also, pointed at the required components to national unity and sectarian pluralism. Those are increasing social awareness about tolerance and dialogue; launching common projects that increase cooperation and development; and finally practically emphasizing on the challenges and obstacles of unity.

The attendance participated in boosting the discussion by their valuable interpositions which were started by Dr. Tawfiq Al-Saif’s. He added to what the lecturer had mentioned about the origin of sectarian emergence to be as a reaction for political events and they were religious or social trends designed to serve political purposes.

Moreover, Sheikh Habib Al-Khabaz wondered about the reason of Muslims of different sectors reading history with bigotry and pride without using their logic sense which is highly respected by Islam. He proved that by mentioning what scholars and thinkers themselves, not the common people, are doing. The lecturer agreed with him and wondered about the benefits of that’s all. He emphasized on the importance of looking over these questions to step forward and that’s by transferring the bright historical events and leaving the rest. He, also, called for establishing institutions that undertake studying and analyzing these enormous quantities of historical events.

Ali Al-Mossa asked a question about the possibility of reaching national unity in the absence of social justice that requires efforts from scholars and researchers since justice is actually absent from most aspects of life starting from family and home.

Jafar Al-Shayeb spoke about the necessity of presenting models to reinforce these concepts and transform them from theory to reality. The lecturer stated that it is important to make this matter available to everyone without focusing on finding models because the conditions are different in each society.

Muhammad Al-Shioukh pointed out that the difficulty of making use of pluralism in a society does not recognize the other different groups, and called upon activating the national dialogue in Saudi Arabia not the sectarian one. The human rights lawyer, AbdulRahman Al-Lahem, emphasized on the importance of the national dialogue which has done its job in reinforcing the discussion values and it’s the time to legislate laws to convict any obstructive practices against other’s rights. Since all of that will set a legislative structure to be the civilian base that pushes them to create developmental thoughts.

Moreover, Sheikh Hasan Al-Saffar spoke about the importance of the authority’s neutrality towards the sectarian issues in a religiously pluralized society. He, also stressed on what happens in real life is opposed to values, judicial authorities and other social sphere. He mentioned that the base of dealing with others must be citizenship not sect to make the theory of pluralism a reality and a fact of life.

Among the Forum’s activity for cultural publication, Jafar Al-Shayeb introduced the book of the week which is “Sectarian Dialogue in Saudi Arabia by Sheikh Muhammad Al-Mahfoud where Sheikh Muhammad Al-Dahaim himself participated in writing it with some distinctive Saudi writers from different sectarian backgrounds.