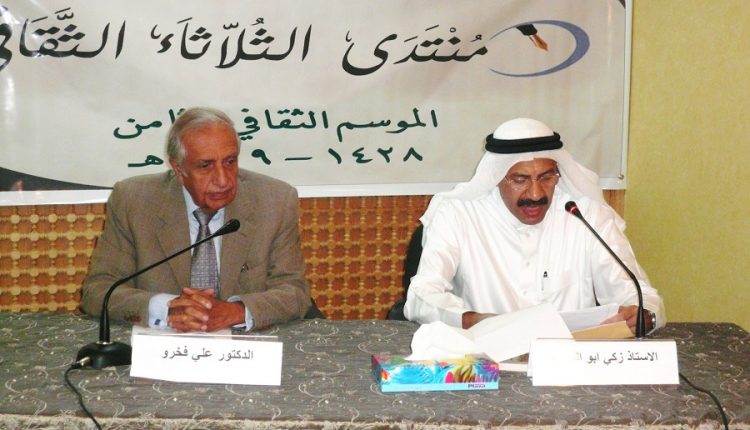 In the evening of Tuesday of Rabi Al-Akhar 16th, 1429Ah corresponding April 22nd, 2008, Althulatha Cultural Forum socially received Dr. Ali Fakhro, the former Minister of Education in Bahrain to speak about educational reform: its necessity and prospects. The program was moderated by Zaki Abu Al-Saud, who referred to education as the real sign for social progress in every nation and an effective tool for development. He added that the responsibility of its effectiveness falls on every individual with a space of freedom of expression, since absence of freedom affects the results like the disability to fulfill the labor market, and teaching negative curricula which hinder the nation from progress and development.

After that, the moderator introduced Dr. Ali Fakhro, who received his bachelor degree of Medicine from the American University in Beirut and the fellowship degree in internal diseases and cardiology from Public Health College in Harvard University, USA. He was, also, awarded the American Certificate of Internal Diseases, and worked as the Chief of the Board of Trustees in Bahrain Center for Studies and Research. He filled several diplomatic positions in Bahrain. He was Minister of Health and Education and an Ambassador to France, Belgium, Spain and Switzerland, beside other administrative positions in different institutions and associations. Moreover, he has written many articles in health, education, politics and culture.

Dr. Fakhro began his lecture emphasizing on the fact of that there is no drastic and real reform if it was not done collectively; the reform in education will be deficient and non-effective if there is no reform in other fields like cultural, political and economical fields. So, he stressed on the necessity of a comprehensive and contrast reform in life’s concerns.

Moreover, Dr. Ali Fakhro pointed at two essential issues stand on the path of reform; which are upbringing and education. That is because there are no clear educational plans in those educational institutions. They limited their goal on graduating people to the labor market without considering their intellectual and spiritual development that prevents the individual from being flexible and capable of changing one’s self then one’s own society.

Another important issue is the schools; the educational cell in the society. Dr. Fakhro believes in that to make this cell functions well, it has to be separated from the control of educational ministries; financially and administratively. It, also, has to be managed by an administrative board not only by one headmaster, and half of the board members must be elected by the teacher themselves. This is to achieve the required democracy in the educational institutions, which without it, there won’t be a healthy environment to practice teaching.

The third important issue mentioned by the speaker is the teaching system in classes. The class must be taught by one teacher in the first three grades in a child’s first learning school years. The lecturer explained the results that a teacher can achieve when he/she understands the students and knows their psychological necessities. Then, one teacher should teach a package of subjects in the next stages like scientific subject or social subjects. After that, students should follow the hours system in high school as in universities. This way enables the student to hold the responsibility of the load he/ she had determined by him/ herself, and the accumulative grading system should be based on the three years of high school instead of the last year only.

Do students learn or they don’t? A question raised by the speaker pointed out that the effective learning is that which changes a student’s thinking and provides him/ her with success means in life. He criticized the current privatization system because it provides an excellent education to affluent classes in the society whereas the middle and poor classes have public education system aimed to satisfy pretexts. He refused the division of the society in education and so it is in economy. He pointed that the large financial surplus in the region must be directed towards offering advanced educational environments compete with the most significant educational centers and institutions in the developed world.

The discussion started by  Hasan Al-Zayer speaking about the immigration of scientific and intellectual minds and patents from the Middle East to Europe and America in search for an environments that fit them. Dr. Tawfiq AlSaif disagreed with Dr. Fakhro’s theory on the difficulty to reform a sector without the others, reviewing some experiments that revealed the capability of partial progress as in South Korea which had been developed scientifically and economically without political reform and he believes that educational reform is possible without any political decision.

Dr. Abdullah Al-Mughamis wondered about the capability of educational reform with political decision or with a comprehensive will; whereas Muneer Al-Nimer wondered about finding suitable school in the absence of the educational visions in the Arab World and he referred to the impact of delegation on the public culture. While Nabih Albrahim spoke about the students suffering in schools are falling down indicating the impact that remains in their minds, he, also, stressed on the importance of considering the school environment as an essential factor for learning requirements.

After the lecturer had answered all the questions that were raised, Jafar Al-Shayeb, the Forum’s sponsor, thanked him for offering the attendance his valuable point of views and thoughts which resulted from his long practical experiences. He hoped that Dr. Fakhro repeats his visit to Saudi Arabia to empower communications and exchanging viewpoints for attaining more effectiveness in the current cultural reform.

The moderator, also, pointed at the art exhibition that is weekly sponsored by the Forum. He mentioned that it is the second week for Qatif Photography Group to be within the forum’s interests which encourages the artistic potential in the region. He, also, presented the book of the weak “Quest Method in Theology” by the authors Ahmad Qasim Al Bazroon and Husain Ali Julaih within the Forum’s activities to encourage writers of the region.