Dr. AlQahtani Reviews the Experience of Civil Rights Movement in the United States 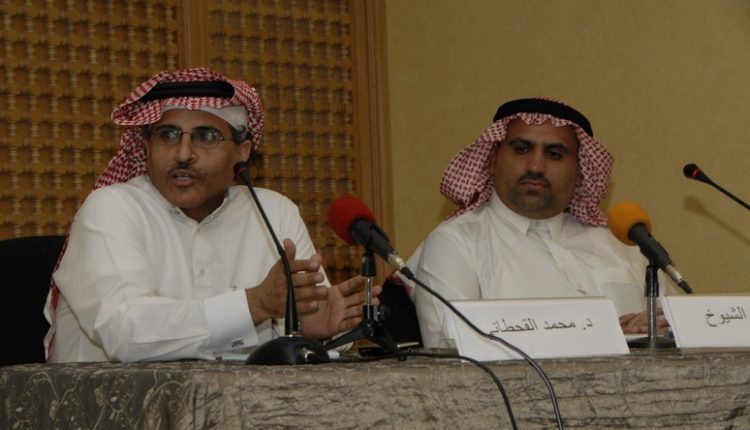 Althulatha Cultural Forum in Qatif initiated its weekly program of the tenth season in the evening of Tuesday, Dhu AlQu’dah 1st, 1430AH corresponding to October 20th, 2009, and by inviting Dr. Mohammad Fahd AlQahtani to review the experience of civil rights movement in the United States. The program was moderated by Mohammad AlShioukh and attended by a number of intellectuals from different cities of Pastern Province, Saudi Arabia.
The moderator introduced the lecturer who was born in Riyadh, Saudi Arabia, and holds a bachelor degree in Economy from King Saud University, Riyadh. He, also, holds a master and a doctorate degree in the same field from Indiana University and University of Pennsylvania, United States. Dr. AlQahtani currently teaches political sciences at the Institute of Diplomatic Studies at the Ministry of Foreign Affairs in Riyadh, and is an opinion writer in Alyaum Newspaper.
AlShioukh talked about the importance of studying human experiences in the field of rights in general and in public freedom cases in particular as they are one of the significant factors that positively affect human rights activity and contribute in achieving justice and equality in any society. He, also, referred to the importance of the experience of civil rights movement in the United States and the peaceful experience of colored Americans because it is one of the most successful human experience in this field. He indicated the three reasons of their success; they are movements that converted to a public stream and did not confine to a specific group, peaceful and did not to turn to violence or counter violence and include regular distinctive activities; therefore, they deserve to be an example of peaceful struggle in cases of discrimination and marginalization.
Dr. Mohammad AlQahtani reviewed the different historical stages of civil rights activity in the United States which were full of black people sufferance since the early fifties till the early seventies when Martin Luther King was assassinated. He indicated that, in the fifties, the Democratic Party was the dominant one and it used to reject the civil rights movement. He cleared that, during the seventies, the United States was divided into two divisions; north and south, at which Afro-Americans presented many sacrifices and were deprived from their civil rights.
AlQahtani noted that Black Americans boycotted the elections; therefore, they were deprived of their most prominent political rights due to the pressures imposed on them. In 1907, the first organization for enforcing civil rights was established and this organization focused mainly on colored people. Later, several organizations for defending colored people were constituted. The target of those organizations was combating racism by following procedures and official laws, and building relationships with decision-makers in order to make them modify some racial laws.
He referred to the public transportation incident which occurred in 1955 in Alabama, at which Roza Parks refused to leave her seat to a white person according the regulations at that time, then, forced to pay a fine. This incident resulted in colored people boycott to that company’s transportation means for 381 days. This campaign ended with the amendment of the law that supported racial separation in public transportation means in 1964.
AlQahtani indicated that some organizations which depended on violence failed to achieve their goals due to the dominance of peaceful work. He added that the government turned to using violence to suppress colored people but this approach affected its reputation negatively. In 1960, Afro-Americans supported John Kennedy’s election campaign and his quest to pass the civil rights law. After the assassination of Kennedy, Johnson was able of passing it and ratifying it in the Congress.
Dr. AlQahtani mentioned the reasons of civil rights movement success in the United States such as the maturity of the movement in its work strategy and its ability to gain the sympathy of various social and political powers as well as its distinctive employment to the regulations and local legislations.
Dr. Tawfiq AlSaif doubted in the peaceful approach of human rights movement in the United States and denied that it was the only pillar for achieving the movement’s goals. He referred the different meanings of violence concept, and confirmed that the most important factor for claiming rights is living the problem; not only the existence of the problem. Dr. Yousif Makki refused limiting the success of human rights movement in the United States to the subjective reasons only indicating that the political Jewish organizations stepped by the side of colored Americans movement and struggle for their own interests.
Sheikh Hassan Alsaffar noted that there were strong voices of white citizens that supported black Americans in their movement because they realize that discrimination would not harm the colored people only; it would harm all citizens. He confirmed that through examining populations’ experiences, it can be proved that struggle needs paying more efforts, sacrifices and hope. Sa’eed AlKabbaz focused on the importance of the economic factor in any transformational process, and mentioned that there are other successful and peaceful experiences which are considered better examples than the civil rights movement in the U.S.
At the end, Jaffar Alshayeb, the Forum’s sponsor, stressed the importance of benefiting from the peaceful experiences in incurring transformation, and making use of them according to what suits with the societies’ abilities in various states. He, also, emphasized the necessity of developing new approaches for confronting the challenges in Arab and Muslim societies.