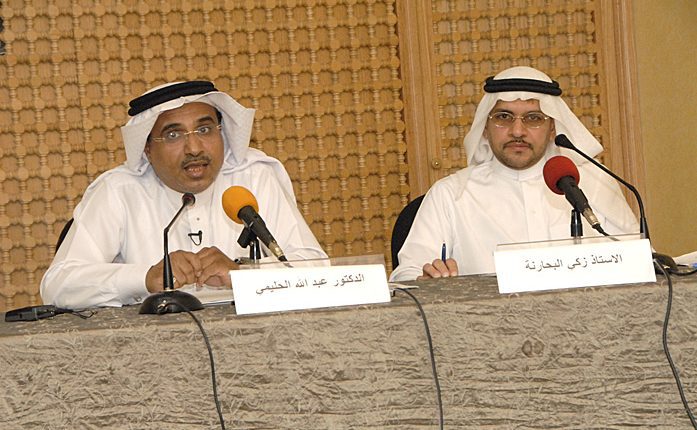 In the presence of elites of intellectuals and journalists in official and civil institutions, Althulatha Cultural Forum in Qatif, Saudi Arabia, has invited Dr. Abdullah AlHaleemi to deliver a lecture entitled “Visual Media; Its Reality and Future” on Tuesday, Dhu AlQa’dah 22nd, 1430AH corresponding to November 10th, 2009. Zaki Albaharnah, the moderator, introduced the lecturer who was born in Alahssa, Eastern Province of Saudi Arabia. He attained his PhD in Sociology from Al-Azhar University in Egypt, and is an elected member in Alahssa Municipal Council. He is, also, a founding member in several civil associations and specialized organizations. Currently, he runs a media production enterprise which prepares various programs for different local and satellite channels.

Dr. AlHaleemi reviewed the development of visual media in the Arab World referring to its tardiness in comparison with Western states. He introduced the satellites broadcasting means indicating the two major satellites in the Arab region; Arabsat and Nilesat. As for Nilesat, it broadcasts 450 Arab channels while Arabsat broadcasts 350 channels, but both of them provide radio broadcasting, telecommunications services and other technical applications. The speaker mentioned that there are several other non-Arab satellites like Atlantic Bird, Hot Bird and AsiaSat broadcast Arab channels in various specializations.

Dr. AlHaleemi said that these Islamic stations; about 170 satellite channels, are committed to Islamic constraints and focus on broadcasting Islamic programs. He indicated that most of their programs are about preaching and education, and that they lack for entertaining programs and funding planning.

The speaker discussed the financial, legal and technical conditions of those Islamic satellite channels pointing that their number is increasing while the quality of their programs is not improving. He, also, stated that those channels focus on certain characters, discuss issues that provoke Muslim and Arab societies and ignore real life issues.

Dr. Abdullah AlHaleemi discussed the current legislations and procedures that are imposed on visual media in Saudi Arabia, and mentioned that they are still so tight and restraining although the Ministry of Culture and Information has worked, lately, on limiting the transference of Saudi productions and works to other states. As for media licenses and permissions, the lecturer said that the procedures of getting them are still complicated and require great efforts and time. On the other hand, the Ministry of Culture and Information seeks launching satellite and ground channels in every region to represent the real life of its inhabitants.

The lecturer reviewed a range of creative productions in visual media; most prominent of which Diwanih Web TV Network which is the first Saudi channel transmitted through the Internet with live broadcast. This channel was established within this year in Jeddah, and provides many programs in various fields; entertainment, drama, poetry, movies and other.

The attendance discussed visual media from different aspects. Jasim AlMusharaf talked about the reality of Islamic satellite channels, and stated that they reflect the status of the society; its sectarian and tribal contradictions as well as its use for the language of streets. As for Hasan Al Hamada, he referred to the weakness of the viewers’ effective role, and how they are passive receivers who do not have any positive influence in determining types and quality of programs. Baqir AlHashim, a journalist, emphasized the huge difference in effectiveness and role between official and commercial media.