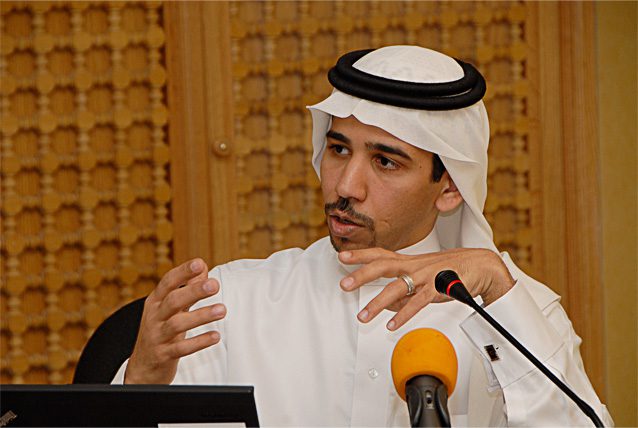 In the evening of Tuesday, Dhu Al-Hijjah 7th, 1430AH corresponding to November 24th, 2009, Althulatha Cultural Forum in Qatif, Saudi Arabia, invited Dr. Abdullah AlHasan to talk about “The International Monetary Fund (IMF) and Global Economy Prospects”. Hadi AlSaif, the moderator, introduced the speaker who was born in Alahssa in Eastern Province of Saudi Arabia. He had his bachelor from King Faisal University, Saudi Arabia, and holds a master and a PhD in economy from the University of Kansas in the United States. Dr. AlHasan worked in several banking and financial institutions in Saudi Arabia; among of the Saudi Arabian Monetary Agency (SAMA), and joined the International Monetary Fund as an economic expert in management of financial markets.

The speaker indicated that the IMF was established in 1944 in order to create a foundation to the international economic system after the Second World War, and to help the world in avoiding the “Great Depression” that occurred in the thirties of the last century. He cleared that the Fund is responsible of several tasks, and works through institutions of three different levels; the Board of Governors which is composed of the delegates of member states, the International Monetary and Financial Committee (IMFC) which is responsible of providing advises to the Board of Governors, and the Executive Board which is composed of twenty-four executive directors to approve on the IMF actions.

Dr. AlHasan reviewed IMF responsibilities; some of which are reinforcing international cooperation through providing a space for consultation and joined action, and working on achieving stability in exchange rates. He pointed that the voting power of the member states in the IMF depends on the steadiness of the economic conditions of these states; for example, the United States is in the top of the list and has a power of %17 while Japan has about %6 and Saudi Arabia has %3.

The lecturer talked about the IMF role in the global financial crisis; it seta global procedures for combating the crisis, and its resources was increased three times by the member states; therefore, it was able of offering loans to countries in need. Moreover, he mentioned that the IMF carries out regular check-ups on the member states which are known as Article IV consultations, and recommended reforming the financial systems through the recapitalization of banks, isolating the bad assets and improving the approaches on which central banks depend in providing systematic liquidity.

As for the global economy prospects, AlHasan indicated that the global economy has improved since the recession pointing that succeeding in regaining stability demands great efforts from several parties in the financial sector, exchange rates and public finance. He, also, stated that there is retreat in dangers around financial stability due to the procedures that were taken in policies which led to the improvement of economy indicating that this economic recovery is increasing in a slow level.

Dr. Abdullah AlHasan recommended that the governments should maintain the refreshing financial payments to achieve full recovery beside the credible obligation of carrying out huge reductions in the financial deficit over the medium term. He said that central banks have proper approaches for reducing their budgets whenever that is needed, and emphasized the necessity of drawing the current policies of the financial sector gradually; especially the ones that distort the economy or burden public finance with huge obligations.

The speaker referred to coming economic challenges over the medium term like enhancing the public resources, reforming the financial system, depending on local resources instead of relying on exporting and rebalancing the global demand.

The attendance discussed the role of IMF in monitoring the economies of member states as well as the negative impacts of interfering in local policies of economically weak states. They, also, reviewed the economic conditions in Gulf States and the influence of having a unified currency and multiple one over the regional economies.