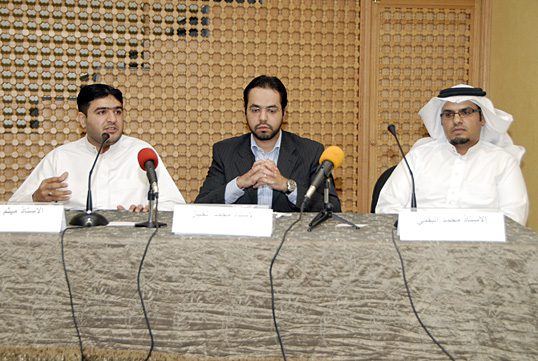 In the evening of Tuesday Dhu AlQa’dah 8th, 1430, corresponding to October 27th, 2009, Althulatha Cultural Forum in Qatif invited Mohammad AlBaqmi and Maytham Khulaif to deliver a lecture about the role of youth in developing the community. Mohammad AlKhabbaz, the moderator, talked about the importance of youth phase and their social role, and mentioned that %77 of Saudi Arabia population is less than forty years old; therefore, it is significant to pay attention to their issues which are considered the most prominent challenges in future planning.

Maytham Khulaif, who has a long term experience in teaching and led many social and youth campaigns, stressed the importance of dialogue, creativity and openness with youth who considers them the key for progress effective interaction. He stated that youth have renewing energy and live a state of knowledge anxiety and desire for adventure, and that require making initiatives that suits those renewing needs.

Khulaif mentioned the most prominent obstacles that hinder youth initiatives include the inability of answering their confusing questions; especially the ones related to traditions and the mentality of sanctity, the interference in youth privacies, restraint of their initiatives, and the inflexibility of the educational system and its inability to deliver information creatively and interactively.

He reviewed the idea of constituting “AlMahabah Committee” by a group of youth for countering violence, crime and ethical deviation in the society. This group was able of making frequent visits to youth gathering centers and neighborhoods councils. The committee, also, communicated with social leaderships and some official institutions, and set alternative practical programs for youth to hold them in effective activities and prevent the sense of frustration. Khulaif talked about another youth experience called “Qatif’s Boys and Girls” which seek developing the sense of national identity, spreading the culture of work and productivity as well as introducing the youth to their region’s heritage and history.

As for Mohammad AlBaqmi, he stated that there is positive response and acceptance to youth initiatives, as well as the constant support from the official authority; especially from the Emirate of Eastern Province which provides contributions through various means. He denied the existence of conspiracies against youth or contradictions between them and other previous generations. AlBaqmi indicated that the Saudi society is in a press need for initiatives that accommodate issues and needs of the youth; especially in confirming social commonalties and handling social division.

He, also, emphasized youth’s need for suitable social contexts that contribute in openness and communication between various social groups to avoid close-mindedness and separation which lead to violence and extremism. He reviewed several regional youth initiatives that are based on communications and cooperation between different social and official institutions. Mohammad AlBaqmi referred to four fields that the initiatives work on.

Those fields have different titles; “Ahdhan” which is concerned of whom are in press need in order to enforce social solidarity, “Afkar” which is concerned of sponsoring young talents and intellectuals through providing them the suitable place and work environment, “Asdiqa’a” which aims strengthening social relationships and communications, and “Amaken” which seeks conserving environment and public places like parks.

Jafar Alshayeb, the Forum’s sponsor, mentioned that the Forum takes care of youth issues which are noted in its previous seasons. He referred to some youth problems which can be attributed to the rapid transformation in the Saudi society and lack of proper solutions. Alshayeb emphasized the significance of those effective civil initiatives because they deal with the needs of the society.

AbdulAdheem AlDhamin, an artist, reviewed the similar experiences like coloring the seats of Qatif Corniche and future youth initiative which aims involving the youth in communicative programs with intellectuals.

Some attendants confirmed the importance of recognizing diversity in the Saudi society in order to be open to different fields and initiatives, and to avoid the development of extreme trends among the youth which may negatively affect social situation in general.