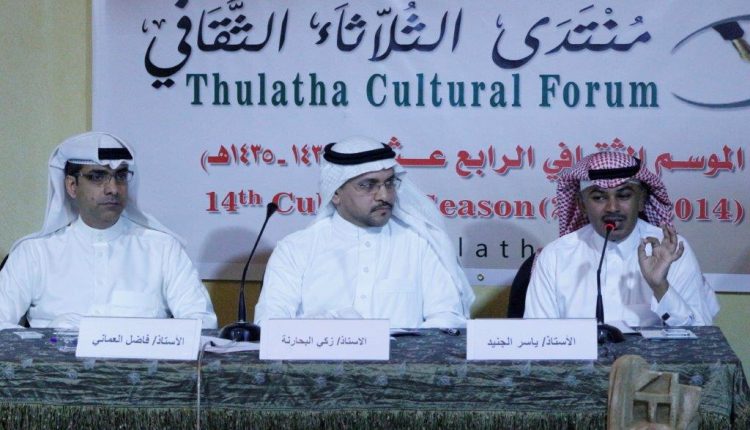 Althulatha, a weekly culture forum established 2000 in Qatif, hosted on April 8 Yasser Aljunied, and Fadel Al-Omani in a lecture about the effect of satellite channels and sectarian media on societies.
At the beginning of the meeting, a short clip was displayed about the report which was prepared by BBC “Freedom to Broadcast Hatred”.

The moderator, Zaki Albaharna, stressed on the importance of addressing sectarian media because of the significant influence of such means on the Arab societies. He added that “local environment has contributed in the emergence of sectarian satellite channels”, and indicated that controversial programs produced on those channels aim to achieve political and intellectual goals, emphasizing on the importance of educating people about the danger of such media”.

Fadel Al-Omani, a journalist, said that media can mislead people, pointing out that satellite channels reach 5,000 around the world, including 1,320 Arabic channels.  He said that “private media prevail heavily where there are 151 specialist, 146 sport, 66 news and 125 religious channels, explaining that Egypt, Saudi Arabia and UAE own most of these channels”.

Al-Omani said that “most religious channels broadcast hatred discourse and incite sectarianism, indicating that “sectarian channels started to emerge dramatically since the fall of Saddam Hussein’s regime”. He added that “inciting sectarianism is not limited on those stations, but it is also broadcasted via other news and secular channels as well. Al-Omani explained that sectarianism contributes in creating various forces and orientations, pointing to the causes of sectarian media in the region such as sectarian tension, extreme and radical scholars, curricula that fuel sectarianism in addition to hatred discourse.

Al-Omani said that “sectarian media by concentrating on incitement against other sect seeks to achieve political goals”. Regarding financing sectarian channels, He said that “several sources including governmental, religious groups and individuals contribute in supporting these channels”. Al-Omani emphasized on the importance of educating people through establishing satellite channels calling for mutual understanding, accepting pluralism in order to combat sectarianism.

On the other hand, Yasser Aljunied, a media consultant said that “sectarian channels are utilized to achieve different political agendas”. He added that “although some religious stations aim to advocate and educate people about religion, they misrepresent their views because of the lack of qualified producers”.

He indicated that among religious channels, there are stations which aim to attract a large number of viewers through inciting sectarianism, explaining that such media don’t have religious or social messages.

Aljunied said that “sectarianism under the pretext of religion led to divide communities and give the opportunity for certain groups to take advantage from this tense situation in the region in order to achieve their political goals”.

He stressed on the importance of dialogue, explaining that any discourse reject pluralism is considered sectarian incitement.

Aljunied said that “defending doctrine is not the responsibility of each individual and it is not a religious duty as well, pointing out that Arab region lack openness especially in Saudi Arabia where misunderstanding toward Shiite still exists”.

The attendance stressed on national unity and communication between inter-follower and the importance to legally criminalize sectarian discrimination. They explained that the continuity of sectarian channels indicates the failure of a national state in the region.

Sheikh Hasan al-Saffar called to hold more frequent meetings to enhance communication between citizens through raising various issues in order to eliminate misunderstanding.
He said that “sectarian media is the result of political factors that ignore citizenship and equality between all citizens in addition to religious fanaticism and radicalism.