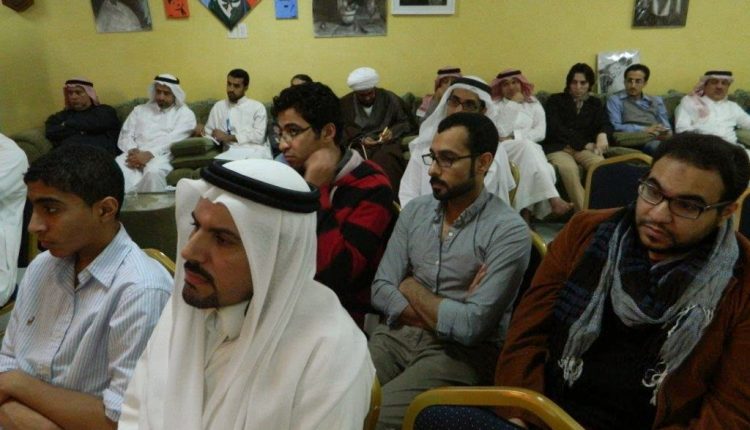 Dr. Abdul Salam Al-Suleiman, a Saudi writer and administrator of Children and Youth section in Arab Urban Development Institute was hosted by Althulath Cultural Forum in Qatif on January 28, to lecture on “Traditional Barriers and Challenges of Openness”. Al-Suleiman confirmed that fear from expressing is the cause which makes citizens in Saudi community abstain from expressing their opinions , pointing to the obvious influence of political conditions on the society.

In a large crowed gathering, he criticized individuals who accept majority opinions in spite of being inconsistent with their interests, stressing on the importance of boldness in expressing views.

Al-Suleiman classified societies into two categories; symmetrical and complex, explaining that Saudi society has the characteristics of the two communities. He clarified the relationship between personality and culture where there are cultural characteristics in personality as gender, nationalism and sectarianism. He pointed to the study which stated that tribalism, imitation and simulation, are an inherent elements in Saudi character.

Al-Suleiman pointed that Saudis are not a representation of one entity, and the recent political events which experienced in the region were an indication of division in the society.
Muhammad Ali Al-Hamza, a Saudi researcher who studied family and social change in his master degree, talked about the aims of the study including studying family type, forms of marriage, role of its members and identifying the influential factors on it.

He is considered as a model in challenging barriers since he is a Saudi of a Sunni background from southern Saudi Arabia who studied family structure in a Shiite city of Safwa in Eastern Province. The study was also done in Imam Mohammed bin Saud Islamic University which is considered ultra-controversial religious school.

The study showed the most prominent problems in the society including unemployment, drugs, weak religious morals, lack of communications with neighbors, high cost of living, housing crisis and environmental pollution.

Al-Hamzah confirmed that religion has a significant influence in the society where religious scholars have a major impact on the family. Religious occasions as well play an important role in enhancing religious awareness, strengthen family relationships, and maintaining ethics and values in the family.

Al-Hamzah stressed on the importance of supporting scientific researches which study family in Saudi society to understand their nature and traditions and to promote coexistence among citizens. He also confirmed on the need of holding meetings, seminars and conferences gathering researchers in various fields to identify the problems in local society and work to solve them.

Attendance in their interferences, pointed to the Saudi society which is passing through a transitional phase between tradition and modernity that creates a concern among some from losing their identity. They also referred to the role of political, religious and sectarian factors besides fear in consolidating tradition expression culture which hinder openness.