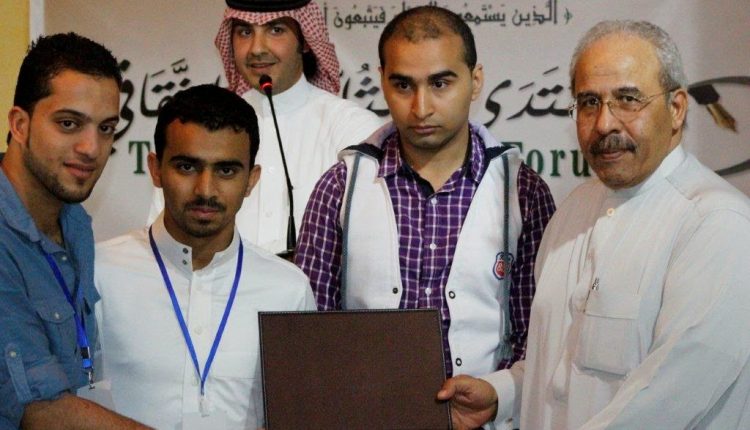 A large number of intellectuals, writers and social figures participated in a seminar titled “Society and Contemporary Challenges” in Althulatha Cultural Forum which was held on March 18. The participants, who represent various segments of the society addressed issues related to social affairs in this stage through serious discussion and debate.

Jafar Alshayeb, the sponsor of the Forum said that “this meeting comes to discuss various issues of the society and its affairs, especially under the current circumstances where many intellectuals and scholars launch Initiatives which call for dialogue”. Alshayeb talked about the importance of discussing and addressing such issues objectively through constructive dialogue which seeks to enhance coexistence and social peace”.

At the beginning of the debate, a participant said that “the recent events in the society are extremely serious particularly in the light of the rapid political transformations in the region which is reflected negatively on social and local affairs”. Others stress on the importance of addressing the situation in the society away from emotional and improvised decisions.

They indicated that changing attitudes toward certain issues does not mean withdrawal or failure but it may come as a result of local and regional changes, explaining that realistic reading of events is needed in order to save efforts and to reach the desirable goals.

Participants said that “recent developments in the region since the beginning of the Arab Spring contributed in expanding demands which soon turned to be a violent trend, contrary to what was expected and therefore led to continues confrontations”.

Some participants considered that religious discourse causes a state of confusion among people which led to the emergence of militant and extreme tendencies.

On the other hand, they indicated that the society is characterized by tolerance and peaceful coexistence, explaining that violence trends represent a minor group who took advantage from the continuation of tense situation in order to achieve their goals, citing by the initiatives which launched by a group of scholars through religious discourse and meetings with various official and civil institutions.

The participants said that “the typical stereotype about the society is not true because there are many positive national attitudes, pointing to the local media which has recently presented more balanced view about the society”.

One of the participants talked about the importance of discussing such issues continuously, explaining that the society should not be a victim of external events. He said that “there is no doubt that citizens are deprived from some rights, but the way of demanding those rights is the cause of controversy between people, stressing on the need to address this issue between all parties”.

A heated debate took place among some of the attendance around the use of violence where some confirmed it while others denied. They said that “there is no relation between what is going on in the region and the Arab Spring, saying that “it is an independent peaceful social movement” expressing their rejection to the recent statement which was issued by a number of Shiite religious scholars”.

In order to address the developments in the region, participants recommended holding such social discussions more frequently to contribute in crystallizing views and different opinions and combating and rejecting all forms of violence. They also stressed on the importance of separating between criminal and political wanted and the need to activate official and civil dialogue between various social leaders in order to address the current situation and to overcome the crisis in the region.

On the other hand, participants emphasized on the importance of supporting initiatives which aim to preserve social peace and eliminate tension in the region, forming committees which consist of social leaders who seek to maintain stability in the society, making objective studies in order to know the causes of social tensions and its sources besides reviewing the prevailing religious discourse in the society. In addition, they confirmed on the importance of respecting different views and staying away from accusations of treason, defending human rights through the cooperation with local human rights institutions as well as studying previous social experiments and take advantage of them in order to preserve stability in the society.

The forum hosted members of Youth Social Committee in Awamiya which was established last year for the purpose of activating the role of youth in social service.