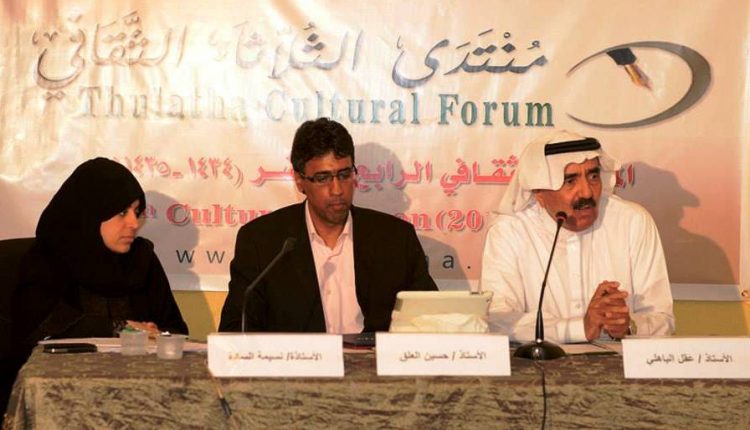 Althulatha Cultural Forum, held a meeting in Oct 29 on the Universal Periodical Report (UPR) of human right status in Saudi Arabia which was held recently in Geneva. It hosted the members of the nongovernmental observer team, among them Mr. Aql Albahili, Ms. Naseema Alsada and Mr. Hussain Alalaq.

Hussain Alalaq, a writer and human rights activist, who also participated with the observer team, started the meeting by praising Althultha Cultural Forum efforts for raising such issues and spreading human rights education and knowledge in the society.

Mr. Aql Albahili presented his views and observations about the UPR process, pointing that all the participating countries questioned the status of the women in Saudi Arabia, confirming that this issue did not witness any progress, especially in the legislative aspects.

On the other hand, Albahili commented on point 21 of the official report which refers to freedom of opinion and expression, which focused on the legislations, wondering about implementing it on the ground. The same applies on the subject of freedom of worship mentioned in the report.

Albahili confirmed in his meeting with the Saudi Ambassador in Geneva, that the report was unsuccessful in its formation, explaining his view that it is below the level of the issues which raises in AlShura Council sessions, and below of what should be presented to international community. He also pointed to point 24 of the report which referred that all Saudi citizens are Muslims, despite the atonement speeches by some preachers which consider some citizens as non- Muslims.

He added “we should recognize the existence of violations and abuses in the Kingdom, as we should seek to find solutions instead of focusing on devoid the Kingdom of them. He mentioned the case of the detainees who are being held for more than 6 months without trial, this also includes torture, confirming that such actions are still practiced although they are illegal.

Albahili pointed to the problem of housing which was mentioned in the report as an achievement, although its problems are clearly visible. He also stressed that the abusive decisions of preventing travel should be legally codified. He emphasized on the importance of spreading the culture of human rights which are affirmed by the Custodian of the Two Holy Mosques.

Human rights activist Naseema Alsada, raised the main topics addressed by the non-governmental reports of the Kingdom in the Human Rights Council, stressing that the presence of an independent institutions within the state, contribute in providing independent reports and information. She mentioned that the file of the Kingdom is being discussed for the second time in the Human Rights Council since 2009, but it is the first time which involves representatives of civil society organizations.

She added that “the non-governmental team presented through the Center for Justice and Human Rights, three parallel reports in collaboration with several organizations and international human rights centers”. She pointed out that the reports dealt with several issues, including cases of torture, the right of peaceful assembly, judicial issues and the subject of women and their rights, such as lack of family law and failure to ensure freedom of movement. The reports also raised notes about the issues of travel pan, the freedom of association, cooperation with international human rights organizations and religious freedom.

Alsada also explained that the participating countries in the debates presented 205 recommendations to improve the human rights status in the Kingdom, stressing the need of hardworking in preparation for the next periodical report, as well as to continue  implementing the voluntary recommendations accepted by the Kingdom.

The member of the participating team in Geneva Mohammad Alshouikh, talked about the most prominent interventions of the countries that commented on the reports of the civil organizations and the submitted recommendations. He also pointed that the 2009 recommendations which have not yet been implemented, among them the issues of foreign labor, media freedom, expression, religious freedoms and the lack of civil society organizations.